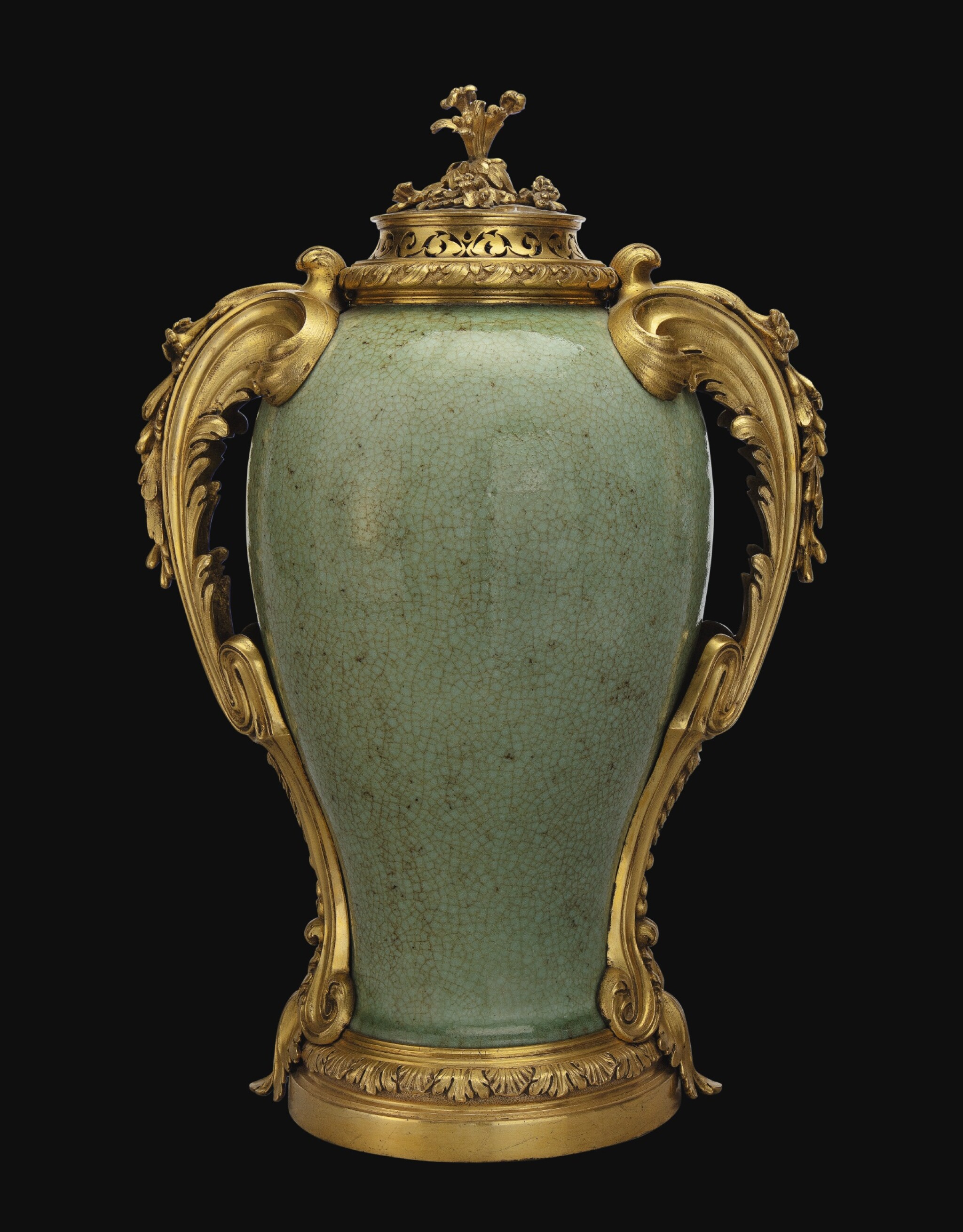 Catalogue photo is accurate for colour. Mounts in good condition with scattered rubbing and marks to gilding, and a few very minor scratches and indentations. Inner rim of lid with a few small dents. The vase with an approx. 3 in. hairline from the rim extending down the shoulder, not very noticeable as it blends in with the crackle glaze, and also with a hairline across the base. There is also a minute chip to the foot. Please note the vase was not un-mounted for inspection. Impressive scale and elegant design.

A very similar celadon porcelain vase with virtually identical mounts, undoubtedly from the same workshop, is in the former royal collections at Versailles (T 403 C) [Fig.1]. It is first recorded in the possession of the Garde-Meuble in 1833 during the reign of Louis-Philippe, and was sent to Versailles in 1836 for the Chambre de Louis XV, but in 1840 is mentioned in the Cabinet de Médailles and was subsequently sent to the Grand Trianon in 1844 where it remained until the early 20th century, when it was exhibited in the Petit Trianon. Since 2002 it has been on display in the Salon de Compagnie of Madame de Pompadour in her apartments in the main château. It has not thus far been traced in any of the 18th-century royal inventories and its date of entry into the Crown collections is unknown, suggesting it may have been an artwork confiscated by the state from one of the émigrés who fled France during the Revolution. If this is the case, it is possible the vase may originally have been en suite with the present lot and was separated during the political upheavals of the 1790s. Another large single celadon crackle-glaze vase with elaborate Louis XV mounts, whose 18th-century provenance remains unknown, was in the Elysee and Tuileries palaces during the Empire and Restoration periods and is now in the Louvre (ill. D. Alcouffe et al., Gilt Bronzes in the Louvre, Dijon 2004, no.42 p.92-93). A further celadon vase of comparable size with nearly identical mounts to the present lot was sold Sotheby's New York, 4 May 1985, lot 219.

The tradition of mounting of Chinese porcelain with metal mounts, initially of silver and silver gilt, dates to the 16th century, but the fashion reached its apogee in the first half of the 18th century, coinciding with the foundation of European porcelain factories and the rapid development of a school of French sculptors and artisans working in gilt-bronze, which supplanted gold and silver as the metal of choice. The trend was spearheaded by a new group of art dealers known as the marchands merciers, who served as designers, middlemen and direct purveyors of luxury goods. Commissioning the French bronziers to mount objects with gilt bronze served a dual purpose of both protecting the material and enhancing its value – and thus the merchant’s profit margin. As the ­marchand mercier Hébert observed in his Dictionnaire pittoresque of 1766, the collection of the connoisseur Blondel de Gagny was filled with 'des porcelaines anciennes et modernes...les mieux choisis et dont l’agrément et le goût de leurs montures semblent disputer de prix avec les pièces qu’elles accompagnent'.

The sculptor and goldsmith Jean-Claude Chambellan Duplessis (1699-1774) was born in Turin and came to Paris in the entourage of the Prince de Carignan around 1718. In 1748 he became artistic director of the Vincennes and later Sèvres factory and in 1758 was named orfèvre du Roi, holding both posts until his death. In addition to designing porcelain forms in the mature rococo style, he also produced designs for gilt bronze in collaboration with the marchands merciers and leading cabinetmakers, and his masterpiece is a pair of large braziers commissioned for the Ottoman Emperor (Istanbul, Topkapi Palace; ill. in H. Ottomeyer and P. Pröschel, Vergoldete Bronzen, Munich 1986, Vol.I, p.121, fig. 2.7.4). The mounts on the Versailles vase and the present lot, with their boldly sculpted but restrained and symmetrical character, belong to the final stage of the French rococo of the late 1750s, sometimes referred to as the rocaille symétrisé classicisant, just before the arrival of the goût grec and shift towards neoclassicism.