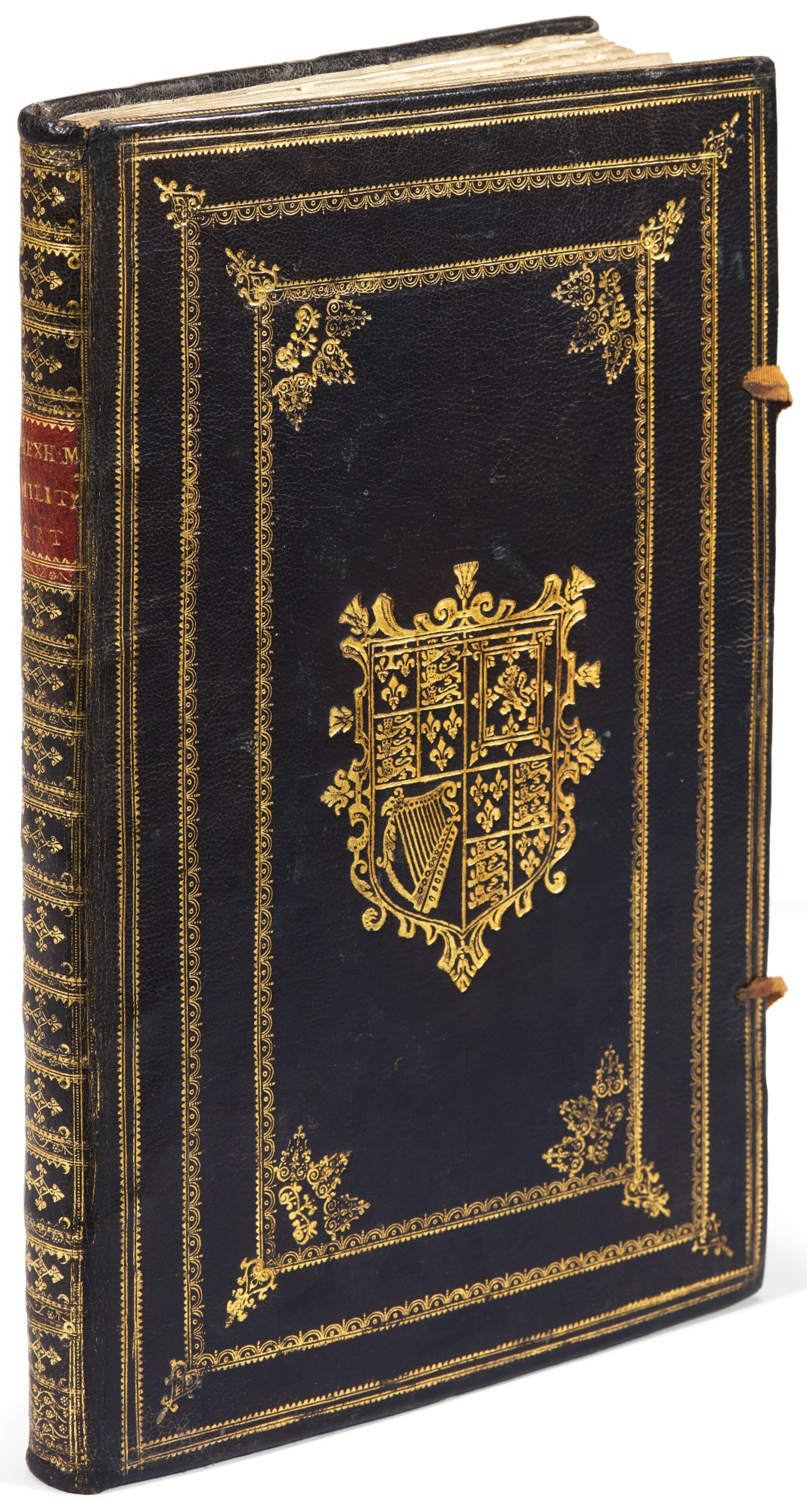 The Principles of the Art Militarie, 4 parts, comprising:

i. The principles of the art militarie; practised in the warres of the United Netherlands. Represented by figure, the word of command, and demonstration. London [i.e. Delft]: Matthew Symmons, 1637, 1 folding plate, 5 full-page engravings, numerous other engravings throughout, all hand-coloured, 1 (of 2) volvelles present, woodcut initials, some neat repairs, light damp-staining

ii. An appendix, of the quarter for the ransoming of officers of all qualities, and souldiers, concluded betweene the King of Spayne his side, and the side of the States Generall, of the united Netherlands. Together, with the lawes, and articles of marshall discipline enacted on the States side. Delft: Jan Pietersz Waelpot, 1637, damp-staining with small loss to a one corner

iii. The second part of the principles, of the art militarie, practised in the warres of the United Provinces… Together with the order & forme of Quartering, encamping, and approching, in a warre offensive, & defensive. With a briefe discourse of cavallerie, or horsemen. Delft: Jan Pietersz Waelpot, 1641, 18 plates (16 folding), all hand-coloured, woodcut initials and head-pieces, this issue not listed in ESTC, damp-staining

iv. The third part of The principles of the art militarie…treating of severall peeces of ordnance, carriages, engines, quadrants, morters, petards, as also instructions for master gunners, and canoniers, with diverse instruments, and materials belonging to a warre with their severall vses, and practises most briefly, and lively demonstrated by letter and figure. Together with a list of all necessarie preparations, appertayning to an armie, with quarter for the generall of the ordnance, and of all officers belonging to his traine. The Hague: Francis vander Spruyt, 1640, 4 plates (2 folding, one double-page), 8 full-page illustrations, additional engravings, all hand-coloured, woodcut initial

4 parts in one volume, folio (335 x 210mm.), PRESENTATION COPY INSCRIBED BY THE AUTHOR TO CHARLES II, WHEN PRINCE OF WALES (“For | His Highnesse Charles by the Grace of God | our hopeful Prince of Wales, the labours of | experience of an ould Souldiers gained | under the Commaund of Prince Maurice | of blessed memorie, and his highnesse | the old prince of Orang that | now is in the warres of | the united Provences on | the states side presents | it selfe in most humble | ness to your highnesse | & rests. | Your highnesses most | humble obedient and | devoted servant | He Hexham”) on front free endpaper, CONTEMPORARY BLACK MOROCCO GILT WITH THE ARMS OF THE PRINCE OF WALES, flat spine ornately gilt, top edge gilt, ribbon ties, preserved in collector's folding box, some browning, damp-staining, hinges slightly starting, bumped

A SUPERB COPY OF ONE OF THE GREATEST MILITARY BOOKS OF THE STUART PERIOD. An exceptionally elaborate and handsome work with engraved plates, each with early hand-colouring, representing the drill movements for pikemen, musketeers, and arquebusiers, based on the Maurician method.

Henry Hexham, soldier and author, began his military career in the service of Sir Francis Vere, commander of the English troops in the United Provinces, at the siege of Ostend in 1601. He remained in Holland and began to publish a series of Protestant religious works, before continuing his military career fighting for the Dutch as quartermaster to Sir Francis Vere at the relief of Breda in 1625. From 1630 he began to publish technical military works and battle narratives.

In 1637 Hexham published The Principles of the Art Militarie Practised in the Warres of the United Netherlands. It was a significant contribution to military theory and the most valuable military encyclopaedia of its day. It was published in three parts and meant to pass along his military knowledge to the "thousands of true hearted Brittaines that shall be all willing to fight in so just a quarrel."

"His three instruction manuals… were a tour de force of English military literature and a veritable catalogue of the Dutch contributions to the transformation of warfare in the late sixteenth and early seventeenth centuries" (David Lawrence, The Complete Soldier, Military Books and Military Culture in Early Stuart England, 1603-1645, p. 104).

The first of his Principles was originally written for the captains of the army, however by the second and third parts, Hexham’s readership was much broader and included infantry soldiers, horsemen and engineers. In the second part, Hexham lists the responsibilities of an officer, including not only the professional but the personal characteristics required of each rank, much like Vegetius, Machiavelli and the great military writers before him.

The arms on the binding (British Armorial Bindings, Charles II, stamp 1) were originally made for Charles I's older brother Prince Henry. Prince Charles was a young child in 1637 and Hexham's inscription, emphasising the English support of the Dutch Protestant cause stretching back to the days of Elizabeth I, no doubt expresses his hope that the young prince will in time take up the cause of International Protestantism.