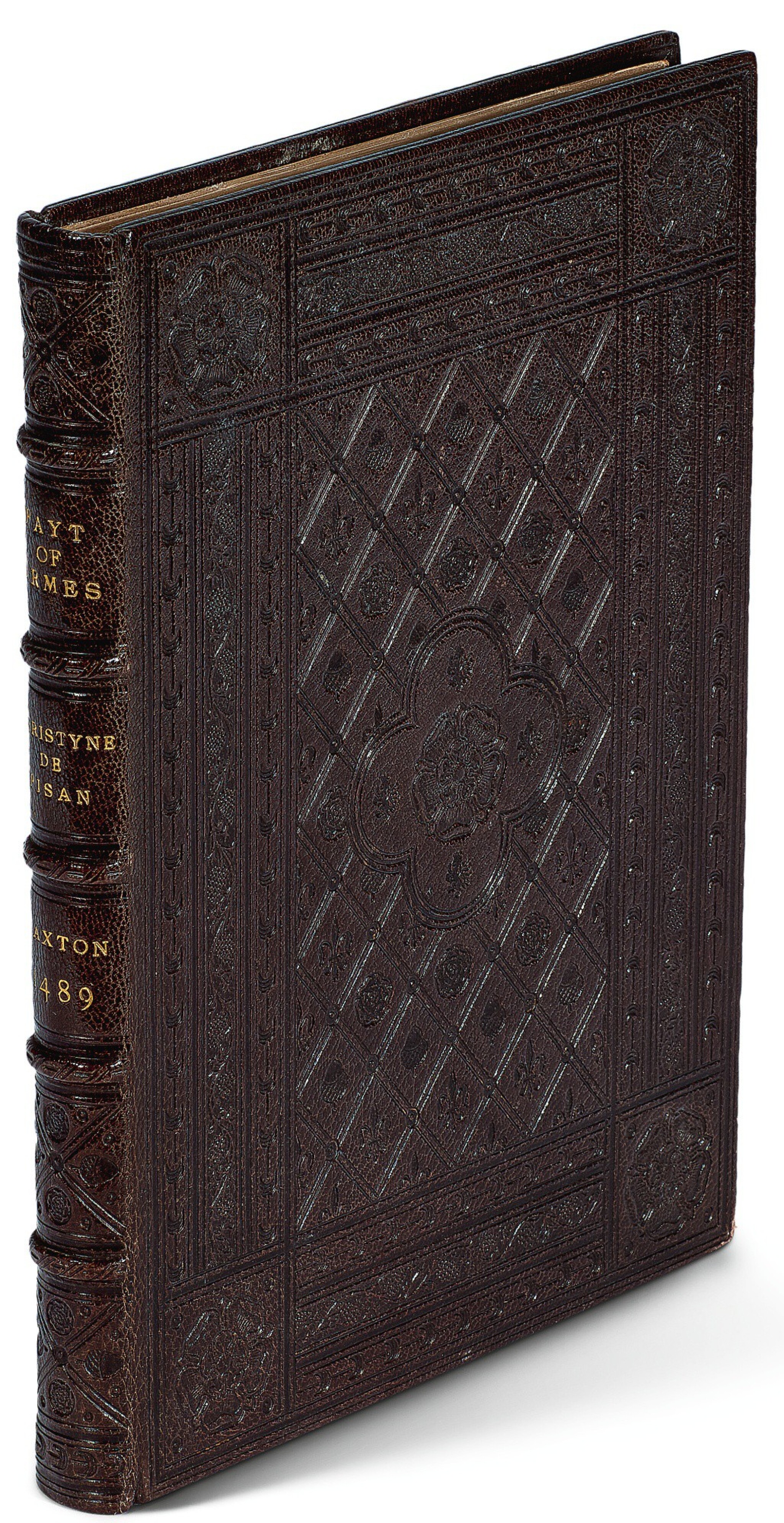 The boke of the fayt of armes and of Chyvalrye. [Westminster]: William Caxton, 14 July 1489

A CLASSIC TEXT OF MILITARY THEORY, AND THE FIRST CONTINENTAL MILITARY BOOK TO BE PUBLISHED IN ENGLISH. The next work to appear in English was by Jacopo di Porcia, translated in 1544 by Peter Betham.

"This book was extracted from several Authors, & compiled by Chrystyne of Pisa... It was translated into English & printed by W Caxton in ye year 1489 at the desire of H. 7th of England" (eighteenth-century manuscript note pasted to front flyleaf). The explicit to this work describes its creation and production. Henry VII was planning a new campaign against France, and he provided Caxton with a manuscript of Christine's original French text in January for him to translate and print; the translation was completed on 8 July, just ahead of the printing. The typeface was new, based on a Flemish one by Johann Veldener.

Christine de Pisan was one of the most prolific and renowned writers of the early fifteenth century, writing works of political theory and tales of chivalry. She composed her Faits d'armes et de chevalerie in around 1410, at the time of the Hundred Years' War, when the French had a weak ruler who was unable to lead the French army effectively against the English.

As Caxton states in his explicit, Christine took much of her work from Vegetius. She probably used the French translation of Jean de Vignay, but she also made use of Frontinus, Valerius Maximus, Honoré Bouvet's Arbre des batailles and other similar works. As with her other political works written at this time, she was updating and adapting Vegetius to create a manual for the contemporary political situation in France, which was in need of peace and unity under a strong monarch. For example, she discusses how to find a deputy able to act for the king on the field of battle, the need to promote only the competent to positions of command, and, most importantly, order and discipline among the troops.

Christine's text was first printed in Paris in 1488, somewhat misleadingly under the authorship of Vegetius, but with the title L'art de chevalerie. Vegetius also emphasised the qualities of personal honour, courage, loyalty and training, which were central to the concept of chivalry. Two English translation of Vegetius had been completed earlier in the fifteenth century, one prose (1408), one verse (1459-1460), but neither was published (the latter probably being a casualty of the Wars of the Roses). Caxton's translation of Christine de Pisan was therefore the only version of Vegetius available in English.

It is somewhat ironic to think that Christine's text, originally written to encourage French resistance to the English, was subsequently put into reverse to boost English courage against the French.