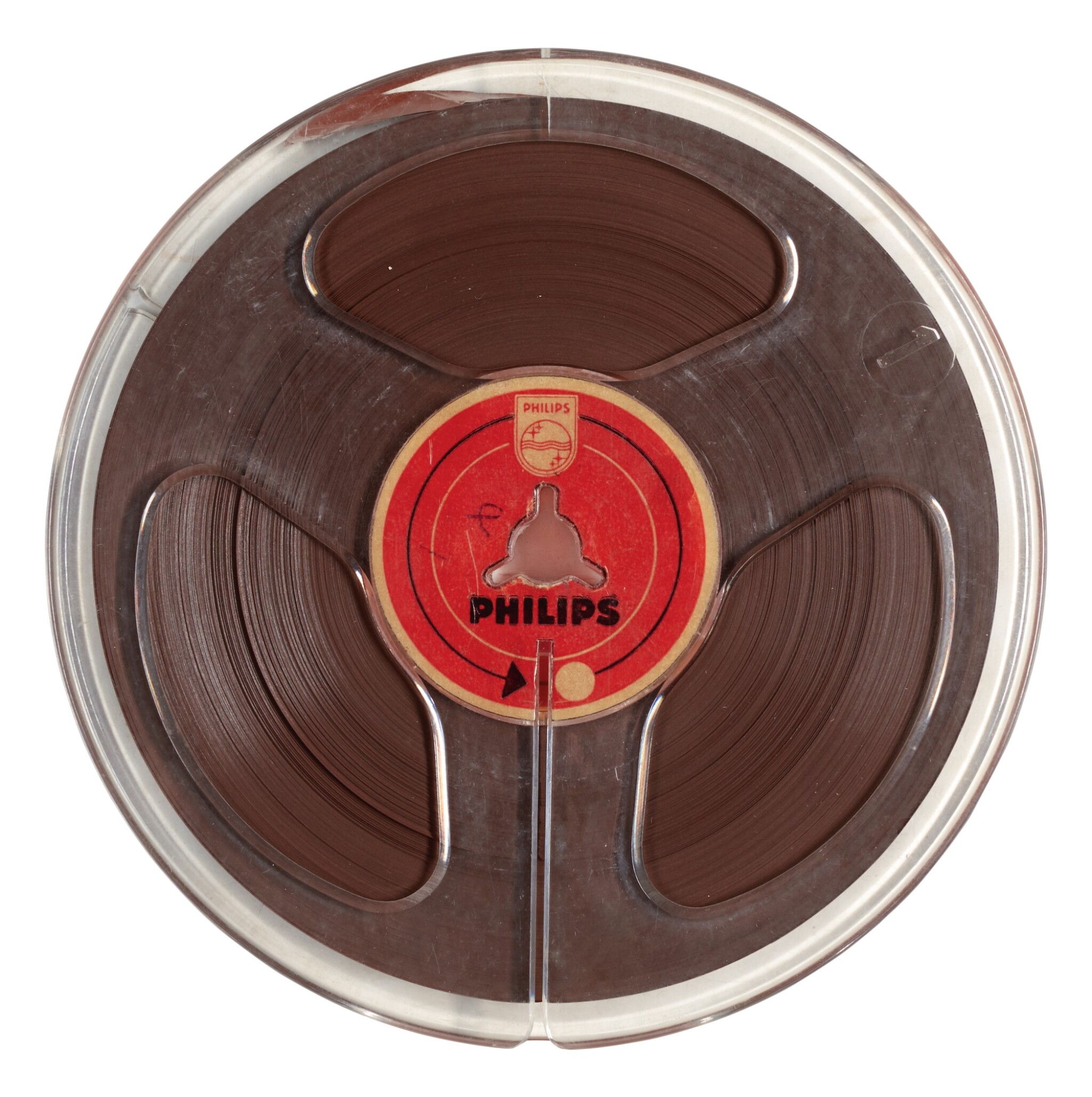 0.25 inch (6.35mm) open reel magnetic tape on a 5 inch (127mm) Phillips brand spool labelled "2" in ball-point, carrying c.15 minutes 20 seconds mono recording at 7.5 inches/second, of The Beatles performing seven songs ('Money', 'The Sheik of Araby', 'Memphis Tennessee', Three Cool Cats', 'Sure to Fall (in Love with You)', 'September in the Rain', and Like Dreamers Do') at Decca Studios, London, on 1 January 1962, housed in a contemporary box (Emitape, for a 5.75 inch spool) labelled "2" and "THE BEATLES" in ballpoint on the base; now housed in a collector's bespoke cloth box; end of tape frayed and brittle with 280mm detached; [with:] CD transfer, letters of provenance and authenticity

BRIAN EPSTEIN'S COPY OF A UNIQUE VERSION OF THE DECCA AUDITION TAPE. The Beatles' commercial test for Decca was a one of the first fruits of Brian Epstein's management and a huge opportunity for the young band. The recording took place on New Year’s Day 1962 at the Decca recording studio on Broadhurst Gardens in the London suburb of West Hampstead. “We virtually recorded our Cavern stage show”, was John's verdict on the session, and the 15 tracks revealed the band’s versatility: R&B standards such as ‘Money’ drove the session but were played alongside novelty songs like ‘The Sheik of Araby’ and three of the self-penned numbers that they had started to introduce to their audiences, of which ‘Like Dreamers Do’ appears on the current selection. Paul took the lead on the vocals, singing seven tracks, with four apiece sung by John and George. The 15 songs were spliced to give them clean beginnings and ends and prepared for review by the Decca management, probably with the expectation that tracks from the session could be the Beatles's first single releases. The band returned to Liverpool believing that they were about to secure a recording contract with Decca.

The contract never came and Decca will forever be the label that turned down The Beatles. It has long been agreed that part of the reason for this was the quality of the session. 10 am on a freezing Monday morning is not the easiest time to rock and roll, especially if the night before had been New Year’s Eve. It would never have been easy to replicate the assured and energetic performances that brought The Beatles such adulation at the Cavern and Mike Smith, the producer, was young, inexperienced and hung-over. Yet listening to these tracks today it is clear that The Beatles, even when underproduced and nervous, still had extraordinary musical panache and charisma. Decca simply did not take the band seriously: they rejected The Beatles in favour of Brian Poole and the Tremeloes because, in part, they didn't want the future inconvenience of transporting them between Liverpool to London; even worse, according to Brian’s autobiography, Decca’s senior A&R man Dick Rowe assured him that: “guitar bands are out, Mr Epstein.” (Epstein, A Cellarful of Noise, p.55).

Epstein was deeply disappointed but walked away from his dealings with Decca session with this precious copy of his band in a professional studio, given to him as a favour, no doubt, because NEMS was a good customer. Epstein's copy of the Decca tape to was to play a key role in next step of The Beatles's story. In February Epstein returned to London and paid a visit to the HMV shop on Oxford Street, where he knew the manager (see Lewisohn, The Beatles: All These Years - Tune In - Extended Special Edition (2013), pp.1105-8). When he explained that his boys wrote their own songs he was encouraged to play his tape to the manager of EMI's publishing arm, based on the top floor of HMV. This was to prove the first step towards publishing Lennon-McCartney songs. More than that, he was allowed to use the small recording studio at HMV to cut acetates from the tape, which he could use to pitch to record companies. Epstein took the acetates to his next meeting, enabling him to play to the producer the first professionally recorded Lennon-McCartney originals. That producer was George Martin.

The Beatles historian Mark Lewisohn has confirmed that this version of the Decca recording is unique: "The ending of Three Cool Cats is a single bass note longer than any version we've had before. The song September in the Rain is four seconds longer than any of the circulated versions as it includes a vocal line which is always edited out. These tiny differences do mark out the tape as original to Brian Epstein, not something created from any other known-to-exist source" (private communication, 2018). It contains half the session, and the other tracks would have fitted onto a second similar tape which is now lost (the current spool is labelled "2"). The tracks themselves are not unique - the first bootlegs of the Decca session appeared in the mid-70s and three of these seven tracks appeared on The Beatles Anthology I - BUT THIS TAPE HAS A UNIQUELY IMPORTANT PROVENANCE AND PLAYED A SIGNIFICANT ROLE IN THE EARLY HISTORY OF THE BEATLES.