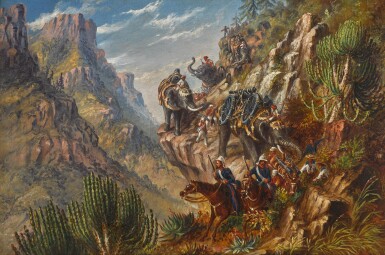 The British Expedition to Abyssinia, 1868; Indian elephants carrying guns up a mountain pass

The canvas has a wax relining, the paint surface is clean and the varnish is clear and even. The vigorous brushwork is very well preserved. Inspection under ultraviolet light reveals some scattered pin-prick retouchings in the sky and in the top of the mountain on the left, but otherwise very little intervention, with only a handful of small spots of retouching. In overall very good condition.

R. Suggate (acquired from the artist)

Born in King’s Lynn, Norfolk, Thomas Baines first travelled to Africa at the age of twenty-two, where he found work as official war artist to the British Army during the Eighth Frontier War. In 1855 he joined Augustus Gregory’s expedition to explore northern Australia; however, he is probably best remembered today for his role as the official artist to David Livingstone’s 1858 expedition along the upper reaches of the Zambezi river, on the border of modern-day Zimbabwe and Zambia. He was consequently the first western artist ever to see and document Victoria Falls.

An intrepid explorer, Baines spent much of the rest of his life travelling throughout southern Africa and died in Durban in 1875, having undertaken numerous expeditions across the continent. Though he never visited Ethiopia he produced a number of paintings on Abyssinian subjects, including Elephant Hunting with the sword, Abyssinia (1867, King’s Lynn Museum, Norfolk). His interest in the region was sparked by the kidnapping of the British Consul in Ethiopia, Charles Duncan Cameron, by Emperor Tewodros II, and the subsequent British Expedition to Abyssinia, under the command of Sir Robert Napier, in 1868.

This is one of a series of paintings about the campaign that Baines painted during his last days in England to illustrate a lecture he gave on Abyssinia at the London Polytechnic. One of the chief objects of this lecture was to illustrate to the British public the severe logistical difficulties faced by a modern European army operating in such challenging and inhospitable terrain, as this painting graphically illustrates. Other works from this group include Troops ascending a ravine from Annesley Bay in Abyssinia (1868) and Devra Damo with the procession of the heir to the throne of Abyssinia (1867), both of which are in the Gubbins Africana Library, Johannesburg. Baines’ knowledge of the topography and culture of the country was drawn from research in the British Museum, particularly the maps and accounts found in Henry Salt’s 1814 Voyage to Abyssinia, combined with his first-hand experience of the awe-inspiring geography of Africa.

The majority of the troops involved in the expedition came from the Indian Army, Primarily the Bengal and Bombay Presidencies, with a small number from the Madras Presidency Army. However, regulars from the British Army's 33rd Regiment of Foot and a detachment of Royal Engineers were also present. The main British force set sail from Bombay under the command of Lieutenant-General Sir Robert Napier, and landed at Zula on the Red Sea on 2 January 1868. With them they brought forty-four trained elephants from India to carry the heavy guns over four hundred miles of mountainous terrain to Emperor Tewodros's fortress at Magdala. The guns seen here are thought to be Armstrong 9 pounders of G Battery, from the 14th Brigade, Royal Artillery, whilst the formation of marching troops are probably the 23rd Sikh Pioneers.