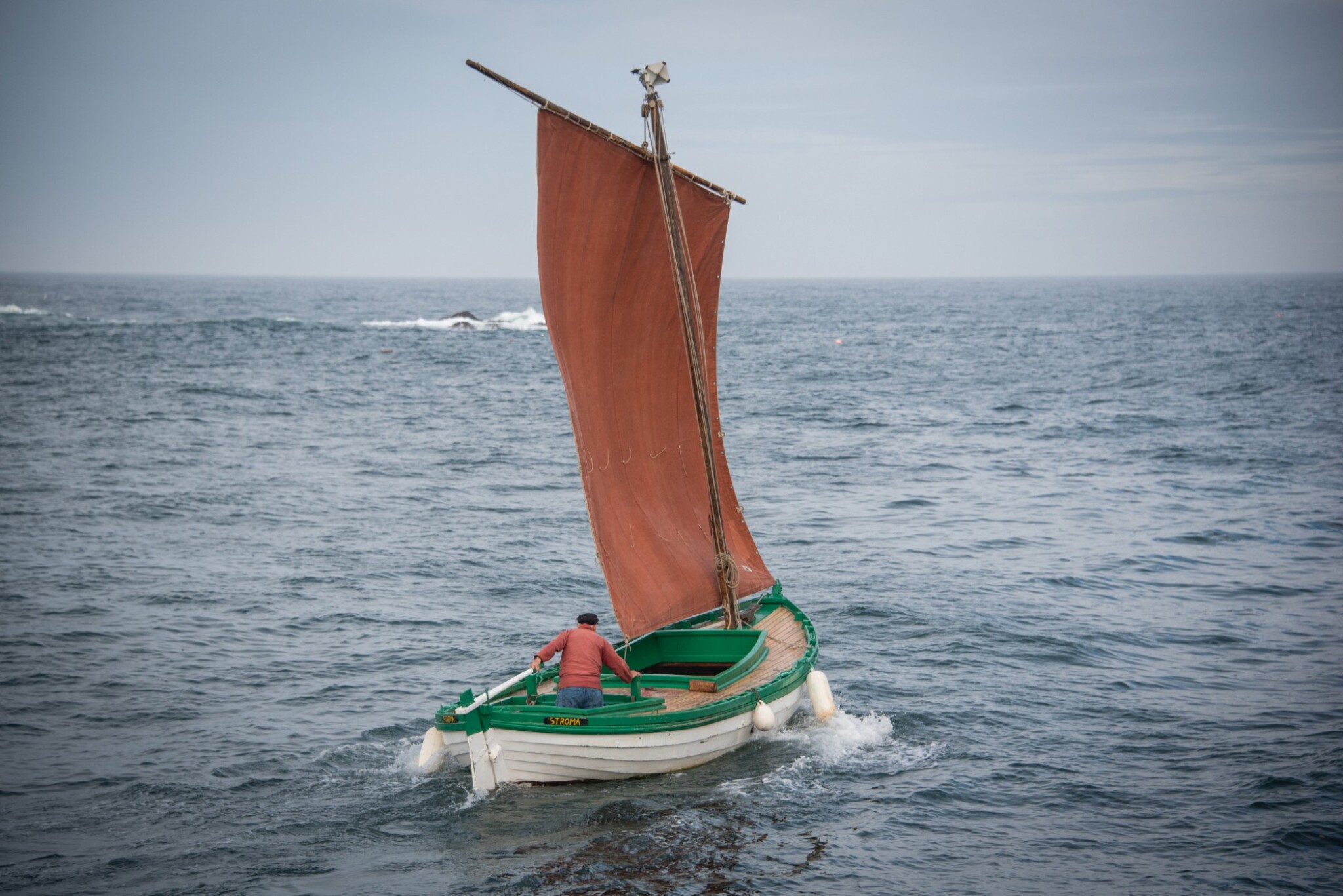 Bee is one of the last remaining examples of the original Stroma Yoles (a variation on the Orkney Yole). Strongly constructed using larch planking, oak frames and copper fastenings, Bee is larger than most yoles. According to the Registry of Fishing Boats in Scotland, Bee was built by the Banks brothers at Harrow near Mey in 1904. She was registered in the port of Wick on the 5th of May 1912 and was given the registration number WK 378. Her method of propulsion was fore and aft sprit sails with lines as the mode of fishing. The entry for name of owner was 'David Sinclair and other residents of Stroma', the other owners were Hugh Simpson, James Robertson, Matthew Dundas and Sinclair Bremner – all were crofters on the island who required a boat to carry livestock to and from the mainland, across one of the roughest stretches of sea in Europe. Bee is fully seaworthy and has a complete Marine Survey Report carried out recently by a Naval Architect. She is currently owned by a charity, The Berwickshire Maritime Trust, who have used her to teach traditional sailing skills to young people. Sale proceeds will benefit the charity.

The island of Stroma is situated just off the north coast of Scotland about two miles from the mainland, northwest of John O’Groats. The island is approximately two miles long and one mile wide and divides the Pentland Firth, one of the strongest tidal streams flowing around Britain. Off the island of Stroma itself a large whirlpool, known as the Swelkie, has a fearsome reputation for swallowing small boats. There is a record of the Vikings arriving on the island in the Njales Saga and the name Stroma comes from the Norse name Straumey, “the island in the stream”. The Orkney and Stroma Yoles have several design features that suggest a Nordic ancestry.

Bee is a true workboat, built for seaworthiness and cargo carrying capacity. Stroma folk were crofters and expert fishermen who owed their existence in equal measure to the land and the sea. They built extremely seaworthy boats to cope with the conditions in the Pentland Firth. The main occupation on the island was long line fishing for cod but the inhabitants also kept livestock and cultivated their crofts. A single vessel was needed to carry livestock to and from the mainland – Bee fulfilled this role for nearly 50 years. There is no record of her ever being sunk.

In Anne Houston’s book “Lest We Forget Canisbay”, there is a description of Bee being used to transport a horse to the island. The charge for transporting a beast was one shilling and it took 12 strong men to load horses or cattle onto the boat, which had to be pulled over by a rope attached to the top of the mast until the gunnel was touching the water, so that the animals could climb aboard. In 1941, a bull belonging to the Department of Agriculture was being transported back to the mainland aboard Bee when the animal took fright and put its hoof through the bottom of the boat. The crofters had to return to the island in a hurry and Sutherland Mason, who was a young boy living on the island at that time, remembers all the local families were given a joint of beef. Sadly he also remembers Bee lying damaged on the beach at Stroma for many years. Although the island had its own church, school, shop and post office, the two world wars of the early twentieth century provided opportunities for finding more lucrative employment on the mainland and people moved away. Stroma and Bee were abandoned until 1968 when Bee was rescued, bought from the descendants of the original owners for £1, and towed to the mainland for repair.

Thanks to the expert restoration and care of John William Laird and then Stan Anderson and Colin Heape, Bee is still very much fit for sailing today and is currently moored in Eyemouth Harbour. She has sailed to the Summer Isles, through the Caledonian Canal, to Cromarty and Nairn on the Moray Firth and to the Portsoy Traditional Boat Festival.

Bee is currently moored in Eyemouth Harbour, Scotland, and is available for viewing by appointment.

Please note, this lot is for collection only from Eyemouth Harbour, Scotland.