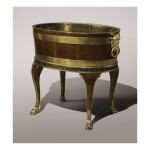 Thence by descent to the 3rd Earl of Iveagh, Elveden Hall

This work belongs to an important group of wine coolers attributed to Samuel Norman of Soho, London, all of identical form and sharing the same ram’s head and hoof feet mounts. Many were acquired by leading patrons of the mid-Georgian period, including a pair supplied to Sir Lawrence Dundas for his Robert Adam-designed interiors at 19 Arlington Street, London (ill. Anthony Coleridge, 'Sir Lawrence Dundas and Chippendale', Apollo, September 1967, p.194-195), sold Sotheby’s London, 4 June 2008, lot 185 (£1,049,250 incl. premium). An identical single wine cooler was formerly in the Untermyer Collection, Metropolitan Museum of Art, New York, sold Christie’s New York, 11 December 2014, lot 36 ($106,250 incl. premium). The latter items had more extensive mounts, including Bacchus masks with trailing bellflowers on the knees, whereas a single wine cooler similarly mounted to the present lot was in the collection of the Dukes of Leeds at Hornby Castle, Yorkshire, now in the Gerstenfeld Collection (ill. E. Lennox-Boyd, ed., Masterpieces of English Furniture: The Gerstenfeld Collection, London 1998, p.225, no.66), and a further comparable example was sold Christie’s London, 4 July 2013, lot 37 (£115,875 incl. premium). Wine coolers attributed to Norman of identical form but with lion’s head rather than ram’s mask mounts include one illustrated in P. Macquoid and R. Edwards, The Dictionary of English Furniture (London 1954, vol.III, p.373, fig.5) and another from the Simon Sainsbury collection, sold Christie’s London, 18 June 2008, lot 106 (£181,250 incl. premium).

Samuel Norman enjoyed a brief but illustrious decade as one of the leading furniture makers in London during the late 1750s and 1760s. Nephew of the renowned cabinetmaker William Hallett, he entered into partnership with James Whittle in 1755, and following the latter’s death in 1759 assumed full control of the business, supplying preeminent clients such as the Duke of Bedford, the Earl of Egremont, the Earl of Holderness, and the Earl of Stanhope. In 1762 he was appointed 'Master Carver in Wood' to the Royal Office of Works and in 1763 was described as 'Sculptor and Carver to their majesties; and surveyor of the curious carvings in Windsor Castle’. Unfortunately, his new roles stretched his abilities and by 1767 he was declared bankrupt.

Elveden Hall in Suffolk was acquired by Edward Cecil Guinness, 1st Earl of Iveagh, in 1894. The previous chatelain had been the Maharajah Duleep Singh, deposed ruler of the Sikh Empire and one-time owner of the Koh-i-Noor diamond, who was sent into exile in England by the British East India Company and purchased the Elveden Estates in 1863, transforming the relatively modest Georgian manor house into a Mughal palace with lavish Indian-inspired interiors, a Victorian oriental fantasy that survives today.