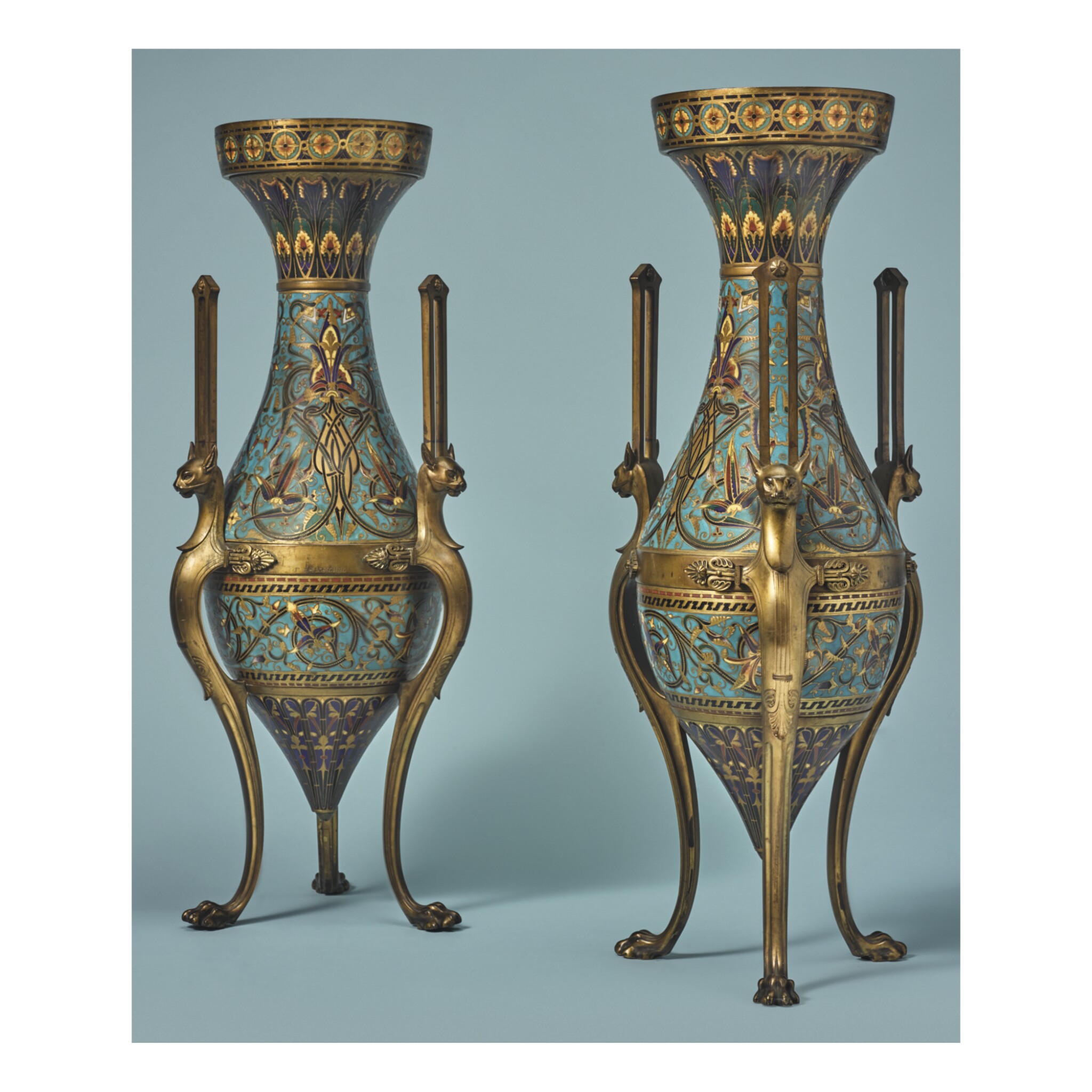 both signed F BARBEDIENNE on the central bronze ring

Rare model of monumental scale and impressive design. Restorations and infill to the enamel decoration throughout. Old repaired dent to one top border with a few small areas of enamel lacking. Old repairs to handles. Scattered rubbing, surface dirt, and minor scratches to gilding.

This impressive and rare pair of vases is a slight variation of a design first exhibited by Barbedienne at the 1862 London International Exhibition, which marked the beginning of a revival in the medieval French tradition of enameling. The form of this work is inspired by ancient Greek amphorae, but the feline heads are more reminiscent of Egyptian taste, and the boldly coloured and intricately scrolling enamel decoration betrays Byzantine, Moorish and even Persian influences, truly reflecting the eclecticism prevalent in French decorative arts during the Second Empire.

The initial version differs from the present lot in the presence of mounted cabochons on the central banding rather than anthemion leaves, and straight rather than gently curved legs. A pair of the first model stamped F. Barbedienne Paris Constant Sévin inv. 1862 was sold Sotheby's New York, 14 March 1995, lot 179 and acquired by the Musée d'Orsay, Paris (OAO 1296), and another pair similarly stamped but dated 1867 was sold Bonham's Los Angeles, 6 June 2017, lot 275. A single vase of this form is in the Cleveland Museum of Art. A pair of vases of the second design, identical to the present lot, was sold Christie's Paris, 29 April 2014, lot 304 (EUR 121,500), and a further single example of this version is in the Milwaukee Art Museum.

The Paris bronze maker and caster Ferdinand Barbedienne (1810-1892) opened his eponymous foundry in 1839 in collaboration with Achille Collas, initially specialising in the production of smaller-scale copies of both Antique and contemporary sculptural work. In 1855 he hired the designer Louis-Constant Sévin (1821-1888) as his chief sculpteur ornemantiste and launched a successful 30-year artistic collaboration creating enameled objects and vases in the 'Neo-Greek' style, with which the firm became particularly associated. Following Barbedienne's death the foundry was taken over by his nephew Gustave Leblanc, who continued the business of casting work by contemporary artists, notably Rodin.