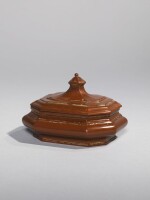 of canted rectangular form, with broad beveled edges, picked out with traces of gilding, the cover surmounted with a high hexagonal pagoda knop, impressed Dreher's mark of an X for George Kittel

The piece is intact and in good appearance.

There are flakes to the horizontal gilded bands. There are two minute restored flat shallow chips at the footrim, each located at a corner, the larger is approximately 0.4 cm wide. There is a tiny nick to the edge of the footrim.

Collection of Siegfried and Lola Kramarsky (by 1963)

Acquired from the above in 2002

Ruth Berges, From Gold to Porcelain, the Art of Porcelain and Faience, New York, 1963,fig. 72.

The form is listed in the 1711 inventory of the Meissen factory: '8 Bassige Zucker Büchße'. An example with gilding was sold at Sotheby's, London, February 24, 2015, lot 234; and a further sugar box with gilding was among the stoneware teawares from the Collection of the Dukes of Baden, sold at Sotheby's, Baden-Baden, October 18, 1995, lots 1251-1258. Another example un-gilded is in the Staatliche Kunstsammlung in Dresden, inventory number P.E.1716, and is illustrated in Goder, et. al, Johann Friedrich Böttger. Die Erfindung des Europäischen Porzellans, Leipzig, 1982, p. 186, fig. 122.