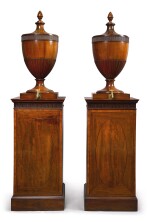 one cupboard with two drawers, the lower fitted as a cellaret; the other metal-lined with two plate-warming racks

In generally good condition, with a few old repaired age splits and small patches to veneer on both. The usual minor nicks, scratches, and areas of slight discoloration commensurate with age and use. Some warping and oxidation to metal lining inside cupboards. One pedestal base missing area of veneer of approximately one inch, visible in catalogue photo. Also with an additional small loss to veneer on proper left rear corner of base. The other pedestal with a few small losses and repairs to veneers on back of base.

Acquired for Mr & Mrs Jack Steinberg from Moss Harris & Sons, 44-52 New Oxford Street, London, 6 May 1947 ('old Adams mahogany side table with pair of urns & pedestals. Circa 1790. £350'), the receipt endorsed by R.W. Symonds who advised on their acquisition

The design of this lot is very similar to a pair of urns and pedestals supplied by the Lancaster firm of Gillows to John Christian M.P. (1756-1828) of Workington Hall, Cumbria, in 1788, a drawing for which survives in the Gillows archives (Susan E. Stuart, Gillows of Lancaster and London, Woodbridge 2008, p.312-13, plates 348-49). Like the present pair, the Workington example also has one cupboard with a drawer for rinsing glasses above a cellaret drawer and the other with slotted shelves to keep food warm.

Robert Wemyss Symonds FRIBA (1889-1958) was the leading English furniture historian during the first half of the 20th century, whose publications still remain standard reference works in the field. He also worked as an architect, decorator and art advisor and helped form several iconic collections of English furniture, including those of Percival Griffiths, Samuel Messer, J.S. Sykes and Geoffrey Blackwell. Symonds typically placed a greater emphasis on quality of design, execution and timber than on provenance in his recommendations. In 1947 he advised Mr and Mrs Jack Steinberg on furnishing their London residence in Portland Place and sourced from the leading dealers of the time, including Mallett, Frank Partridge and Moss Harris. A large group of works from the Steinberg Collection was sold by Christie's London, 19 May 2016, lots 1-64, which included five other pieces of furniture acquired by Symonds from Moss Harris on the same day as these urns and pedestals, among them an important pair of library armchairs and a roll-top bureau attributed to John Cobb.