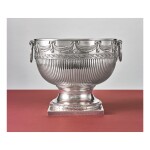 applied at the rim with chased ribbon-tied drapery swags above a cast band of Vitruvian scrolls, large pendant ring handles, the stem engraved twice with contemporary arms, above a band of ribbon-tied running laurel, the square base engraved with loops of husks above Greek key rim

marked on base and with scratch weight oz 155=12

The arms are those of Greville under an earl’s coronet for George, 2nd Earl of Warwick of Warwick Castle, 1746-1816, who married 1st Georgiana only daughter of Sir James Peachy Bart, 1st Lord Selsey.

She had one son George who died in 1786, and she died in 1772. He married secondly in 1776 Henrietta, daughter of Richard Vernon of Hilton, co. Stafford, granddaughter maternally of John 1st Earl Gower, by whom he had several children including Henry Richard, 3rd Earl.