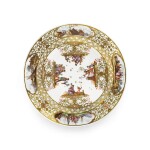 A MEISSEN CHINOISERIE CIRCULAR DISH CIRCA 1735

A MEISSEN CHINOISERIE CIRCULAR DISH CIRCA 1735

The overall appearance and condition of the dish is good. There is some minor rubbing to the gilding of two of the gilded scroll brackets supporting painted figures at the center.