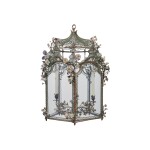 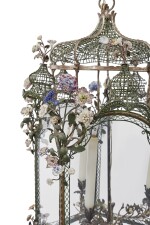 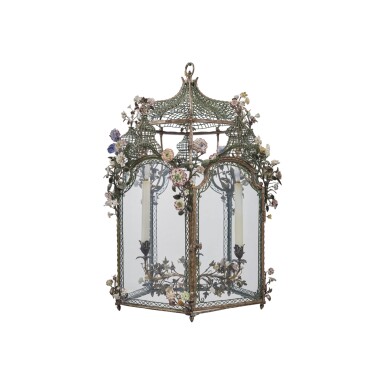 The invention of bronze hanging lanterns mounted with porcelain flowers is generally attributed to the Parisian marchand-mercier Lazare Duvaux, whose daybook records approximately thirty examples supplied to the court and important financiers between 1748 and 1755 (L. Courajod, Le livre-journal de Lazare Duvaux, Paris 1873). Of these, nearly half were five-sided, rather than square or hexagonal, and about ten were described as having trellis-work (à treillage), including one supplied to the King at the Château de Choisy in August 1751 (entry no.883). Many were originally gilded, but four lanterns are listed as being silvered, among these a square version acquired in November 1750 by Madame de Pompadour (no.648). The latter would acquire no fewer than nine similar lanterns from Lazare-Duvaux, mainly decorated with flowers from Vincennes, the porcelain factory founded in 1740 and placed under the protection of the King and his favourite.

The distinctive pierced bulbous pediments above the panes are highly unusual in French 18th-century decorative arts, more evocative of ecclesiastic architecture in Central Europe and Russia - suggesting this lantern may have been intended for export. Indeed, gilt bronze and gilt bronze-mounted objects manufactured in Paris are known to have regularly been sent to the Russian, Ottoman and other courts during the 1760s. Intriguingly, a gilt metal pentagonal lantern with porcelain flowers that appears to be a somewhat simplistic interpretation of the present lot was formerly in the Ekaterinhof Palace, St Petersburg, illustrated in Igor Sychev, Russian Bronze (Moscow 2003, p.32). It has been suggested this lantern was produced in connection with the French expatriate Jean-François Arnoult, who in 1762 was engaged by the St Petersburg Imperial Academy of Arts to instruct local artisans in ‘chandelier-making’, and is believed to have produced porcelain-mounted objects himself similar to contemporary Parisian work during his stay in Russia. Arnoult left the Academy and moved to the Imperial Porcelain Factory in 1764, but only worked there a year before his dismissal for falsifying invoices.