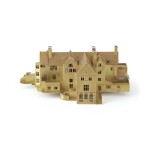 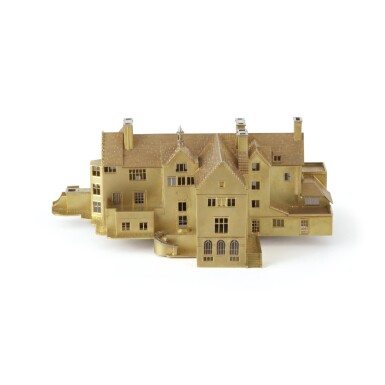 PROPERTY FROM A NORTHWEST COLLECTION

engraved underneath N.G. Dyer - J.R. Ringer 1974, in a fitted case with gold plaque engraved Chartwell Home of the late Sir Winston Churchill now a property of the National Trust.

In good condition; the case with light surface wear.

Chartwell in Westerham, Kent was built 1923-4, with earlier origins, by Philip Tilden. It was the home of Winston Churchill between 1922-65. It was acquired by the National Trust in 1946, and opened to the public in 1966.

This model of Churchill’s mansion was commissioned in 1974 from the English jewelers, N.G. Dyer & J.R. Ringer, by Donald McKechnie, an Englishman who was passionate about Winston Churchill and found Chartwell Home to be exceptionally beautiful. His daughter, Anne McKechnie, was married to the painter Michael Upton, and both were great friends of the artist David Hockney. Anne served as a model for a number of Hockney’s paintings. When Donald fell into ill health, the model was purchased by Alban Butler-Gould, a family friend who lived in a country home called Trevanion Close, to help alleviate his medical costs. The gold model descended in the family to the present owner, who is now offering it at auction.