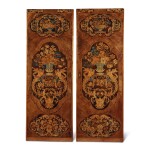 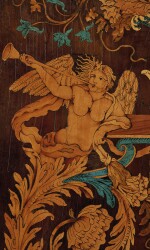 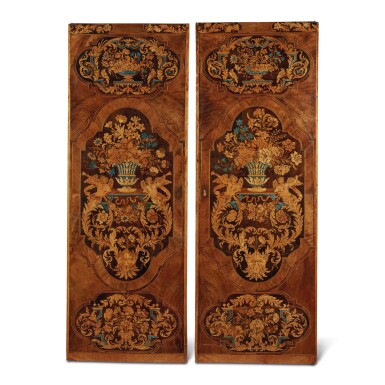 In good condition with typical scattered age cracks and minor areas of infill, small losses, and patches to inlaid decoration. As stated in catalogue, formerly doors of an armoire, now reduced in size along the borders with some replacements to veneers along the edges, visible in catalogue images. Now in black stained frames. Colors are very vibrant and in a good state of preservation.

Thomas Hache (1644-1747) was part of the most important dynasty of cabinetmakers working in Ancien Régime France outside of Paris. His workshop in Grenoble specialised in creating virtuoso inlaid surfaces using almost exclusively native Alpine woods and burr woods, the designs heavily influenced by the fashionable floral marquetry of the 17th century practised by Parisian ébénistes such as the Dutch-born Pierre Gole, in whose atelier Thomas Hache is believed to have trained. Under the influence of nearby Italy, however, Hache innovated by incorporating brightly blue or green-coloured scagliola inlay, seen to dazzling effect in the present lot.