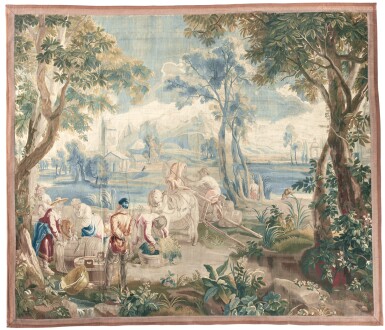 woven with workshop initials within the lower section of tapestry, V.L.D.L., with later banded outer selvedges

There are some minor repairs, professionally executed. Condition of weave very good overall. Some minor areas, in light highlight areas, where old repairs and some minor areas with warp threads showing (which could be consolidated - stablilised), they are in the body of the horse (as visible in the photograph), and in the area light colour of the horizon, centre right hand side of composition. Two minor splits, one in cloud top right corner, and one in foliage, top centre.

The 'Teniers' tapestries were among the most widely distributed of Flemish tapestries, in the 18th century, with the scenes depicting contemporary pastoral life, and influenced by original paintings by the artist David II Teniers (1610-1690), which included the Kermesse. The popularity of the scenes with small figures in landscapes, by various artists were popular for tapestries which in turn were woven in various weaving centres, including Brussels, Oudenaarde and Lille, and also in Beauvais, Madrid and London. The dimensions, scale and quality varied, especially over time. Every Brussels workshop of significance produced sets of Teniers tapestries, which were widely sought after.

For comparable versions of this subject matter, see a Leyniers workshop tapestry, of wider proportions and with further figures packing fish, to the left of the tree on the left side of the present weaving, and a weaving with the same composition as the offered lot (without the trees on the far right of the composition), woven by Jacques van der Borcht workshop, within distinctive frame pattern border, from a set of tapestries originally belonging to the Earl of Crawford and Balcarres, see Marillier, C., Handbook to the Teniers Tapestries, London, 1932, p.32, Plates 40 a & b. A reduced and later version, woven in reverse of the present composition was sold a Sotheby's, Amsterdam, 17 September 2007, lot 1042.

The Leyniers, were one of the oldest and most widely known families of weavers and dyers in Brussels, which in turn was at the epicentre of tapestry weaving tradition. There is reference to Nicolaas, his son Antoon, and grandson Jacob in the sixteenth century. The family achieved status when Jacob became dean of the tapestry profession in 1659, which was status later achieved by Everaert III (1597-1680), in 1635. Daniel (1587-1659) in 1630 was reported as being the best dyer in Brussels, and considering the number of dyers, this was a notable achievement. The family used monograms, then initials and the name Leyniers to identify their tapestries. The present tapestry has the initials of both Urbanus (1674 - 1747), originally a dyer, who managed the workshop from 1720 - 1729, and then with his son Daniel III (1705 - 1770), hence the initials V.L.D.L appearing together. (The U always woven as a V). Daniel III was the last manager of the workshop, closing it finally in 1768.