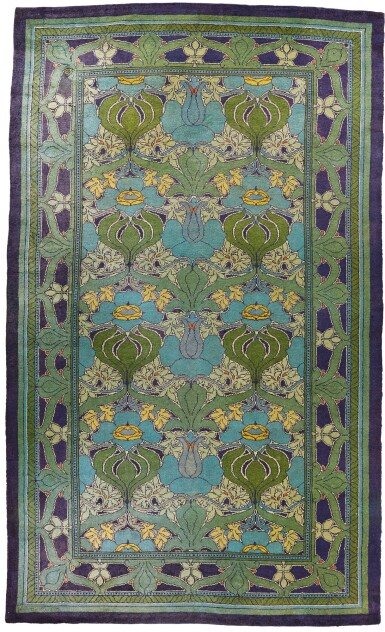 Overall in very good condition. Recently cleaned and overhauled. Generally with very good pile, with area of light use in upper centre portion of field near to border. There are several small reweaves scattered through the plain purple surround. Additional images show that these are only just discernible on the face of the carpet, and essentially not noticeable unless being actively looked for. They are really only easily identifiable from the reverse of the carpet. Based on their location/size they probably represent restored old moth damage. The ends are secured on the reverse with matching cotton tape, sides are reovercast. The carpet is ready to use and is a good example of the Donnemara and a good, large size.

Designed by Charles Francis Annesley Voysey; the influential Arts and Crafts architect known particularly for his designs for furniture, textiles, carpets and wallpaper was contracted in 1897 by Alexander Morton and Co to provide designs for fabrics and carpets. The ‘Donnemara’ was a popular design and woven in several colourways and sizes, most probably to order. The example offered here has been in the same family since c.1910. A related example was sold Sotheby’s London, 1000 Ways of Seeing:The Private Collection of the late Stanley J. Seeger, 5-6 March 2014, Lot 576 (sold £43,750).

Morton & Co., founded by Alexander Morton (1844-1923) was originally a textiles firm: Morton had set up his first hand loom in his family’s cottage in Darvel in Ayrshire, in 1860. By 1875 he had Darval’s first mechanical lace machine and by 1886 had forty machines. Alexander, and particularly his son James, were enthusiastic supporters of artist designers for the firm’s products, inspired by William Morris and the ethos of the arts and crafts movement. Morton & Co. diversified into hand knotted carpets with support from the British Government and the Congested Districts Board (established by A.J. Balfour in 1891) to promote industry in rural Ireland. Their first carpets were woven in a rented hayloft in Killybegs in Donegal. Production commenced in 1898 and in August the following year Donegal carpets were exhibited at the Dublin Horse Show. Included in the ‘Irish Carpet Exhibition’ at the Grafton Gallery in 1903, the ‘Donnemara’ was described in a pamphlet issued by Liberty's as: ‘a pleasing rendering of tulips and half blown roses, modulated and blended together with excellent decorative effect. The buds of the tulips, on a plain ground, are introduced as a border pattern.’

Edwin Ramsay Moodie was a cotton merchant, living with his family at Hinderton Lodge, Neston from 1908. After WW1 the family moved to Henley Park, Normandy, Guildford; the house was requisitioned at the beginning of WW2 by Vokes, makers of engine filters, to replace their London factory which had been bombed and the family, and carpet, moved to Ghyll Manor, Rusper (now a hotel). The carpet was inherited by the present owner in c.1975.