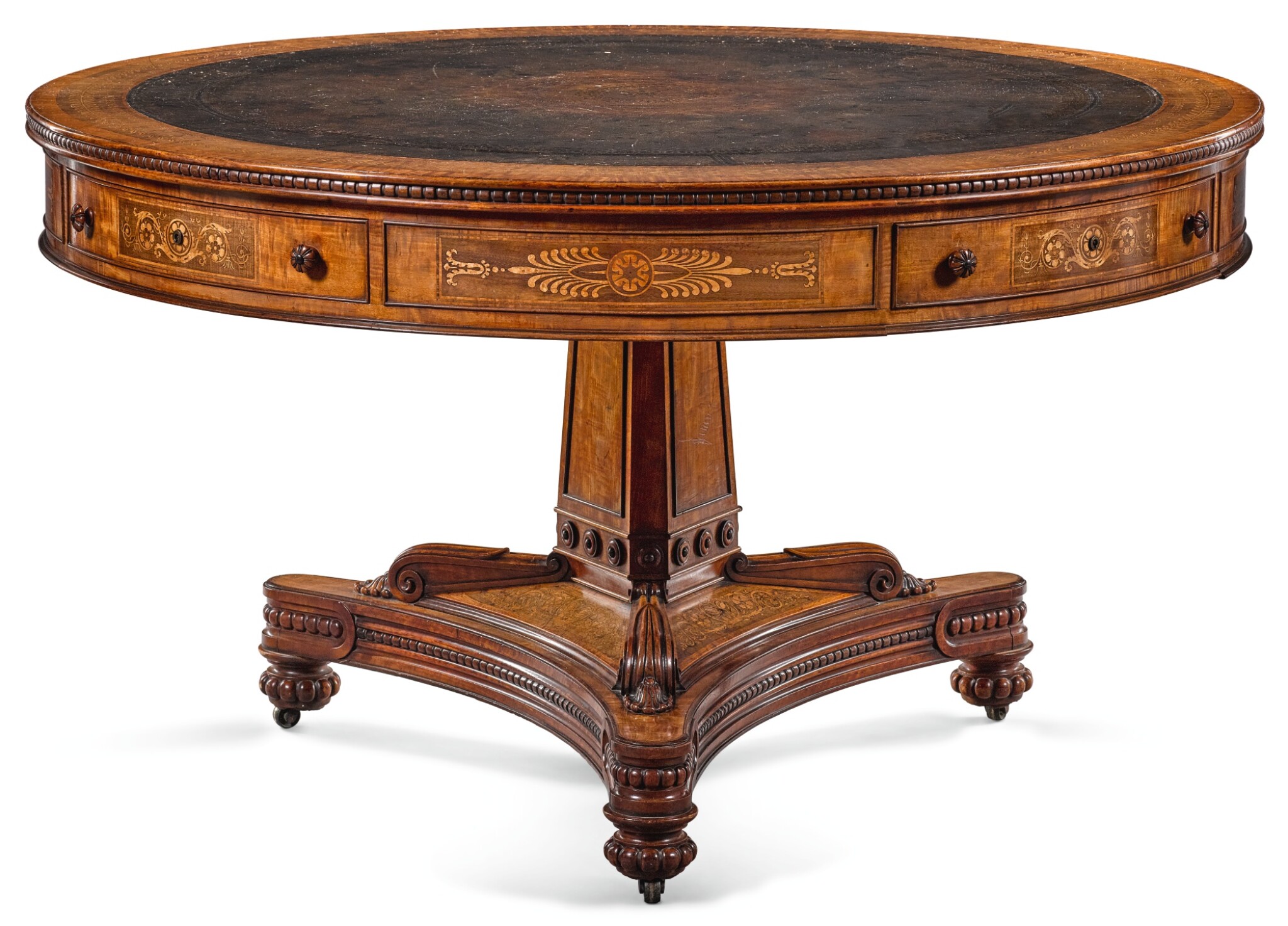 the revolving top inlaid with laurel banded edge to the black tooled leather panel top over the formal classical foliate inlaid frieze fitted with four drawers flanked by faux drawers, on the canted triangular pedestal with moulded borders, inlaid to match the frieze, on knurled bun feet with concealed castors

A fine piece in overall good conserved condition. The leather top with atmospheric old marks and scratches which do not detract, notably discolouration to top around the center of the tooled leather (see high res images on website for further illustration). Generally with minor replacements to mouldings and movement to veneers. One small loss to moulding on stem. Generally with minor old marks and scratches. A beautiful table.

This exceptionally fine drum table displays several leitmotifs associated with the output of cabinet-maker George Bullock (1777/78-1818). Bullock was one of the most innovative and unconventional British furniture designers of the Regency period and is particularly noted for his distinctive use of marquetry. Born in Birmingham, he was established as a sculptor and cabinetmaker in Liverpool by 1804, where he ran a workshop and retail outlet called the Grecian Rooms, and by 1809 was recorded working in London. He was also an exhibitor at both the Royal and Liverpool Academies. He is most famous for his exploitation of native British materials including woods such as larch, burr oak and Mona Marble from the island of Anglesey in Wales.

Although Bullock was soon forgotten after his premature death in 1818, he worked for some of the most illustrious clients of the day, including the Duke of Atholl at Blair Castle, the son of Matthew Boulton at Tew Park, the novelist Sir Walter Scott and most famously Napoleon in exile at Longwood House on St Helena.

The designs for the marquetry inlay to the drawer fronts and base of the present table - employing Bullock's ubiquitous stylised honeysuckle and flowerheads - compare favourably to examples recorded in The Wilkinson Tracings (a set of over 200 sheets of designs for furniture and marquetry described on the cover page as "Tracings by Thomas Wilkinson, from the designs of the late Mr George Bullock 1820" and now in the City of Birmingham Museum and Art Gallery) and reproduced Wainwright et al, George Bullock, Cabinet Maker, London, 1988, p. 96, fig. 41. The pattern to the base is particularly close to that employed on a set of sixteen chairs supplied to the aforementioned Matthew Robinson Boutlon for Tew Park, Oxfordshire, circa 1817. Although undocumented in the Tew Park accounts, they were highly likely to have been supplied by Bullock (Wainwright et al, op. cit., p. 90, No. 27). The laurel and berry border to the top probably evolved from the monopodium table illustrated in Thomas Hope's Household Furniture and Interior Decoration, 1807 (pl. XXXIX) whilst the use of turned discs is a further characteristic found on documented pieces by Bullock.