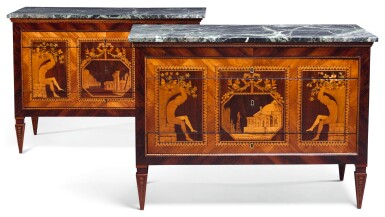 PROPERTY OF AN IMPORTANT EUROPEAN COLLECTION

PROPERTY OF AN IMPORTANT EUROPEAN COLLECTION

each with a serpentina verde marble top, above three long drawers inlaid sans traverse depicting a landscape flanked on each side by a telamon figures, on four tapering legs

In overall good restored condition. Generally with minor chips old marks and scratches to veneer surface. Both commodes with horizontal age cracks to the sides. Both marble tops with a break across the middle, which has been restored. Otherwise, with minor chipping to the edges. One corner of a marble top with three sticky areas, which could benefit from cleaning. Two keys. Ready to be placed.

This pair of commodes is an important example of the Lombardian neoclassical style that was so influential in Italy in the second half of the 18th century. The fruitful development of Lombardia’s neoclassical style began with the establishment of the court in Milan: in fact, starting from 1771, Ferdinand of Habsburg commissioned the building of his Palace and of the Villa di Monza to the Italian Giuseppe Piermarini who entrusted the task of designing the stucco decoration and part of the furnishings to the Milan-based designer Giocondo Albertolli.

The commodes are noteworthy for their proportions and quality of the marquetry decorations. The architectural structure of the overall design reinforced with architectural scenes in marquetry are balanced by the telamons and foliate decorations. Furthermore, the decorations on the three drawers sans traverse are a testimony of the skills and expertise of the master who manufactured these commodes, possibly a pupil in the workshop of Giuseppe Maggiolini (1738-1814), the influential Milanese cabinetmaker.

The design of these commodes relates to an example dated from 1790 executed by the Maggiolini's workshop now in the collections of the Marquess Casati-Visconti di San Vito (illustrated in G. Morazzoni, Il Mobile Intarsiato di Giuseppe Maggiolini, Milan, 1957, pl. LXV). The main difference lies in the depiction on the central panel whereby the telamons, carrying a basket of flowers and leaves, flank on each sides a central medallion enclosing an angel. Another related example attributed to the Maggiolini’s workshop and depicting an almost identical design as the Casati-Visconti commode was offered Sotheby’s Paris, 19 April 2016, lot 219.

The present pieces may be distinguished from these two aforementioned examples by the three medallions in octagons enclosing architectural scenes with classical buildings, which could possibly depict the pyramid of Sestius and its Roman surroundings. A commode in the style of Maggiolini sold Sotheby’s London, 20 July 1972, lot 111 interestingly depicts an almost identical landscape scene with a church.