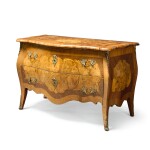 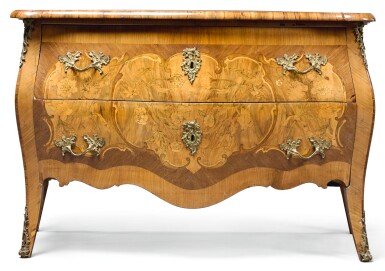 PROPERTY FROM A GERMAN PRIVATE COLLECTION

PROPERTY FROM A GERMAN PRIVATE COLLECTION

the moulded serpentine-shaped top inlaid with a basket of fruits and flowers above two bombé-shaped drawers, on cabriole legs

In overall good conserved condition. Top apparently with a water ring mark (about 10cm diameter). The veneer surface with minor old marks and scratches consistent with age and use. Some minor veneer replacements. One minor chip to the bottom left of the top drawer. The right corner of the bottom drawer shows a visible crack, which would benefit from further attention. The gilt-bronze mounts in good condition. Marquetry well drawn and executed. One key.

This elegant commode with its serpentine bombé shape and floral marquetry panels showcases the expressive naturalist style evident in German furniture making during the middle of the 18th century and, more precisely, in the work of Johann Friedrich (born 1726) and Heinrich Wilhelm Spindler (born 1738). Characteristic of their work is the combination of expressive walnut veneers with lavish marquetry floral pictures enclosed in rocaille inlaid frames and flower sprays. Naturally, this commode bears one of their standard characteristic, found across almost all of their commodes: the tripartite division on the cartouche adorned with an impressive yet light-hearted marquetry work.

Johann Friedrich and his stepbrother Heinrich Wilhelm Spindler, sons of the Bayreuth cabinetmaker Johann Jacob Spindler moved from Bayreuth to Postdam towards the end of 1763 to become the court ébénistes to Frederick the Great (1712-1786). They were according to Sigrid Sangl "as among the leading craftsmen to have worked in that special variant of the rococo style practised at his Court" (S. Sangl, op.cit. p.22). Given their fine skills as marqueteurs, the Spindler brothers quickly became famous especially with the furniture and boiseries they provided for the rooms of the Neues Palais located in the Sansouci park of Postdam.

The gilt-bronze mounts for the brothers furniture pieces were often provided by the Swiss Johann Melchior Kambli (1718-1783). It may seem surprising that the Spindlers' skillful marquetry work was cut across by Kambli's gilt-bronze mounts. However, Sigrid Sangl confirms that the collaboration, although legitimate, between the successful craftsmen Kambli and the Spindlers did not necessarily follow a planned production process (Sangl, op.cit., p.29).

This commode relates to a series of similar examples by the Spindler brothers which are dispersed in private collections, in Münich's Bayerisches Nationalmuseum and in Dresden's Museum für Kunsthandwerk (H. Kreisel, op.cit., figs. 790-793 and Sangl, op.cit., p.42, figs.18-19). Similar examples have also resurfaced on the market: a pair of commodes offered Christie's London, 9 July 2009, lot 142, another pair offered Sotheby's London, 2 December 2008, lot 136 and one commode offered Sotheby's Amsterdam, 29-30 October 2007, lot 355.