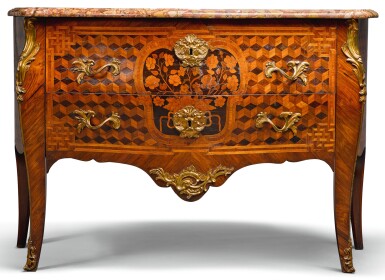 In overall good condition. The marble top with minor chipping, old marks and scratches consistent with age and used. Some losses have been refilled.

The gilt bronze mounts in general good condition. The veneer surface with minor cracks and lifting. Minor old marks and scratches throughout. The top drawer stamped by the retailer, Howard & Sons Berners St.

This commode epitomizes the fashion for Louis XVI furniture in Holland during the 1760s and 70s. Since The Hague's guild of furniture makers complained to the city council about the influx of furniture imported from abroad, particularly from France, several furniture makers like Horrix began to emulate French models.

Matthijs Horrix (1735 -1809) was The Hague's best-known furniture maker in the late eighteenth century, with the largest workshop in the city. Moving from Germany, he set up independently in the Netherlands in the 1760s and was enrolled in the Hague guild as a master cabinet-maker on 15 May 1764. Following the marriage in 1767 of Stadholder Prince William V and Princess Wilhelmina of Prussia, Horrix received the prestigious commission to provide the Stadholder's quarters with furnishings such as commodes and tables, many of which share similarities with the present commode. These common characteristics are the tripartite division, the centre of the cartouche with a floral marquetry flanked on each side with parquetry patterns framed with geometrical (see Baarsen, op.cit., 1993, p.188), the a gilt-bronze mount showing foliage on the commode's crest.