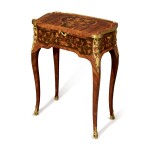 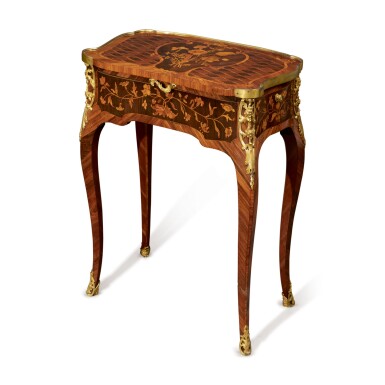 A LOUIS XV GILT BRONZE-MOUNTED KINGWOOD, TULIPWOOD AND FRUITWOOD MARQUETRY AND PARQUETRY TABLE À ÉCRIRE IN THE MANNER OF GILLES JOUBERT, CIRCA 1765

In good condition overall with scattered marks, age cracks, and patches to veneer. Areas of veneer (approximately 1 in.) on proper left front and back legs lacking.

Comparable floral marquetry appears on a table supplied by Gilles Joubert in 1770 for the Cabinet de la Dauphine Marie Antoinette at Versailles, later transferred to the Cabinet of Madame Victoire at Fontainebleau (Paris, Louvre OA9335, ill. in A. Pradère, Les Ebénistes Français de Louis XIV à la Révolution, Paris 1989, p. 219 fig. 216), as well as on Table Rognon by the same maker sold Sotheby's London, 17 May 1963. Gilles Joubert (1689–1775) worked for the Royal Household for over two decades commencing in 1748, both supplying his own work and subcontracting to colleagues. Has was named ébéniste du roi on the death of Jean-François Oeben in 1763. Between 1748 and his retirement in 1774 he delivered nearly 4,000 pieces of furniture to the Crown Garde-Meuble, and his work is represented in most major public collections including the V&A, Frick Collection, Metropolitan Museum and the Getty Museum.

Belgian-born René Fribourg (1880-1963) ran his family's grain-export business founded in 1813, which transferred to New York at the outbreak of World War II. He formed a significant collection of 18th-century French fine and decorative arts displayed in his townhouse at 11 East 84th Street. After his death the museum-quality works were sold in a landmark seven-part auction in London, one of the most important single-owner sales of the early postwar era and the first to receive intense media attention on both sides of the Atlantic.