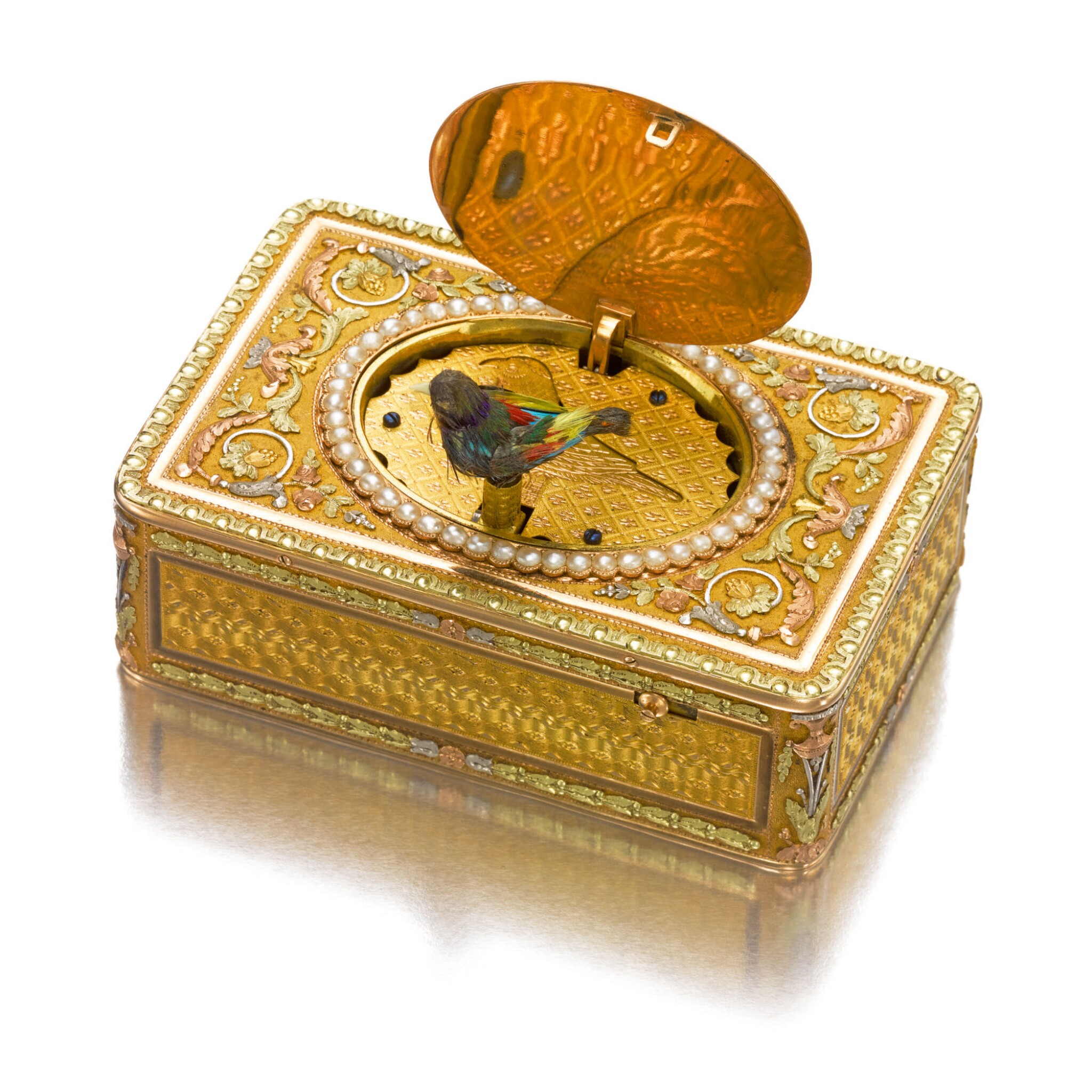 the rectangular case engine turned on sablé ground bordered by running varicolor gold foliage, the top panel finely chased with varicolor gold scrolling foliage, centered by an oval lid decorated with a polychrome enamel burst of summer flowers on translucent pink enamel over engine-turning, edged by split pearls, the brightly feathered bird rising from a bird-shaped reserve; the bird realistically swivels its body, flaps its wings, opens and closes its beak, moves its head and tail, the base with central engine-turned reserve centered by a blank rectangular cartouche and bordered by varicolor gold scrolling foliage, the bird mechanism with fusee and chain, rectangular bellows, the song produced by a piston whistle, eight stacked cams, male key wound, the back with a hinged compartment. Together with an associated paper grained travel box and male key, 3 pieces

the box stamped with case maker's mark CI (Chenevard Jouvet & Cie) in an oval, Geneva gold mark (G) used after 1815, the movement stamped FR in an oval for Frères Rochat and number 382

The gold box overall in very good condition with very little wear and crisp engine turning and engraving to the panels. Light oxidation overall visible in between the scrolls and foliage, light wear to the corner engraved and chased vases. Light marks around the screws on the edges. The top enamel panel in good condition with repair at the hinge measuring 1 x 1 cm. Upon opening the box the bird rises but fails to sing or move of its own accord, the movement in need of oiling and cleaning. The bird does move and the box sings when the fusee is rotated. Bird with some feathers fraying.

Please note that due to CITES restrictions, this lot will be limited to US buyers.

The present lot is notable given its small size of 78 mm, a technical achievement given the complexity of the singing bird movement. Other examples of singing birds range in the length of 85 to 90 mm.

Salomon Chénevard (1773-1837) worked as jeweler living in the Rue de Temple, Geneva. Both Chénevard and the jeweler Jean-Louis Joly (1757-1825) had been partners of the firm Roux, Ponçon & Cie., manufacturers of bijouterie, from September 1801 until 1803. They are recorded as entering their first marks in the name of Joly & Chénevard in 1807/8. In 1815 they had taken on a younger partner, Pierre Jouvet, exemplified by their new mark, depicting ICI in a lozenge. In 1820, they re-named the firm Chénevard, Jouvet & Cie. Jouvet’s wife, Jacqueline Etienette Guidon took Joly's place on his retirement in 1824.

The firm of Frères Rochat began as David Rochat & Son in Le Brassus (1718-1806) and became famous for its complicated movements and a variety of complex novelties that included singing birds in mirrors, snuff boxes, needle cases and pistols.

For a discussion of their work see Eugène Jaquet and Alfred Chapuis, The Technique and History of the Swiss Watch, pp. 154-156. The firm was listed as 'Geneva makers 1810-1835’.