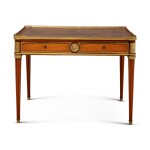 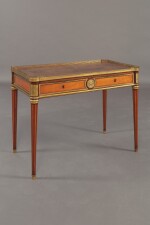 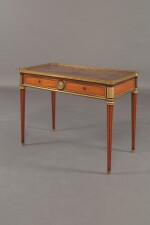 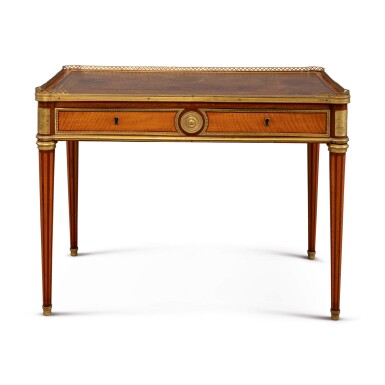 Veneers in good condition and nice color with scattered marks, scuffs, and small patches. One leg with a very small area (approx. 1.5 cm) of veneer lifting. Gilt bronze mounts with slight rubbing and tarnishing to gilding. And slight warping in places, but nothing distracting. Top with old repaired horizontal age splits and a newer horizontal age split across its length. Would benefit from restoration and requires the leather to be replaced. Past sale documents (1944 sale catalogue and 1875 auction invoice) will be remitted to purchaser.

This desk is first recorded on the market en suite with a commode and secrétaire at an 1875 auction in Reims, and the original invoice is annotated with a note stating the furniture came from the Princesse de Lamballe:

Born in Turin, Princess Marie-Louise Thérèse of Savoy-Carignan (1749-1792) was married in 1767 to Louis Alexandre de Bourbon-Penthièvre, Prince de Lamballe, grandson of Louis XIV's legitimized son the Comte de Toulouse and heir to one of the largest fortunes in France. He died one year later, and the widowed Princess became a confidante and lady-in-waiting to Marie-Antoinette. As such she was imprisoned during the Revolution and perished at the hands of the mob during the September Massacres of 1792. The lawyer Etienne de Joly served as counsel to King Louis XVI and was the last Minister of Justice in 1792 before the abolition of the monarchy. The group of furniture could well have been given to him by the Princesse de Lamballe as payment for services or for safekeeping - she had fled France for England briefly between June and October 1791 - and the suite then passed to his daughter Madame Champeaux.