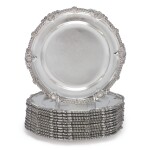 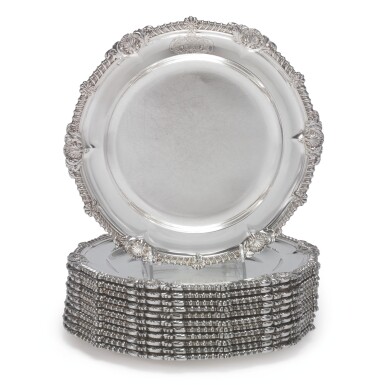 gadroon rims with shells and acanthus at intervals, the borders engraved with accollé arms and motto in drapery mantle below coronet

All with light knife cuts and occasional minor nicks from use, otherwise in good condition. Nice, heavy weight.

The arms are those of Butler for Walter, Marquess of Ormonde and 18th Earl of Ormonde K.P., b. Feb. 5, 1770, created Marquess of Ormonde in Ireland and Baron Lanthony in England of Kilkenny Castle. He married March 17, 1805 Anna Maria Catherine, only daughter and sole heir of Joseph Hart Pryce Clarke of Sutton Hall, co. Derby. He disposed of the grant of the presage of the wines of Ireland made to the 4th Butler by Edward I to the crown in 1810 for 216,000 pounds. His wife died in 1817 and he in 1820 without issue when the marquessate of Ormonde and the baronry of Butler expired and the other honors devolved upon his brother.