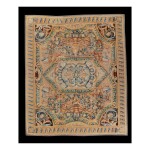 As a fragmentary carpet, it has been reduced from its original length and width. The end borders are original and were reattached to the main body of carpet. One cut through central medallion, and one cut between the medallion and each stag head. Visible cuts and repaired areas throughout. Repairs and repiled areas throughout. Some visible fading. The foundation is slightly dry. The edges with added flat woven borders. For additional information please contact the department.

Part of the Royal Garde-Meuble commission of 93 carpets for the Louvre, 1667

This lot is a rare appearance on the market of a work from one of the most important and audacious artistic commissions of the reign of Louis XIV, the decision to cover the entire Grande Galerie of the Louvre with a series of 93 carpets ordered from the Savonnerie factory, founded in 1615. Following the death of his First Minister Cardinal Mazarin in 1661, Louis XIV assumed full control of the government, and one of his first projects was to transform the Louvre into the most magnificent royal palace in Europe, part of a dual policy of seeking the glorification of the French monarchy through the splendour of its official residences and promoting French arts and industry. It was in this spirit that the King's finance minister Jean-Baptiste Colbert (1619-1683) had founded the Gobelins factory in in Paris in 1662 in the aim of supplying the Royal Household with tapestries, furniture, pietre dure panels and precious metalwork produced locally rather than importing such luxury objects from abroad.

The most spectacular space of the late 17th-century Louvre was the long gallery linking the old royal apartments of the Cour Carrée with the Pavillon de Flore at the south end of the Tuileries Palace facing the gardens. Constructed during the reign of Henri IV in the first decade of the 17th century, it was referred to as the Galerie du bord de l'eau and extended along the Seine for a length of 442 metres at an internal width of nearly 9 metres, and today houses the Louvre's important collection of Italian paintings. The ceiling of its 46 bays were originally intended to be painted by the artist Nicolas Poussin in a scheme that had never been finished, and the carpets formed part of broader project to complete the gallery's overall decoration.

The Savonnerie factory was founded in 1615 by Pierre DuPont, who had studied the technique of manufacturing knotted-pile carpets in the Ottoman Empire, and in 1627 Louis XIII granted a royal monopoly to Dupont and his former apprentice Simon Lourdet, whose families ran rival workshops divided between the large ateliers on the ground floor of the Grande Galerie and in a former soap factory on the Quai de Chaillot on the western edge of Paris. Its products were reserved exclusively for the Crown and served in royal interiors and as diplomatic gifts. Prior to Louis XIV's commission the Savonnerie had never previously produced carpets of such a large scale, and special looms of exceptional width were constructed. Between 1664 and 1666 a group of thirteen carpets were ordered for the smaller adjacent Galerie d'Apollon as a sort of trial run, and these were delivered in 1667.

The Grande Galerie commission was examined in depth in Pierre Verlet's seminal study of the Savonnerie factory, later updated by Wolf Burchard. The broader scheme would have been supervised by Colbert in collaboration with the architect Louis Le Vau and the head of the Gobelins and premier peintre du roi Charles Le Brun, who is believed to have played a role in providing the designs. Payments for cartoons specifically provided for the project are recorded to the painters François Francart (1622-1672), Yvart Baudren (1611-1690), both in the orbit of Le Brun and both living and working at the Gobelins factory. The composition was uniform for the entire series, with a large central allegorical section flanked by rich arabesques and rinceaux a rich fond brun brown-black ground, and cartouches at either end depicting either classical bas-reliefs or more rarely landscapes, all within a classical reeded border and fleur-de-lis in the four corners. The full panoply of classic Louis XIV iconography was already in evidence, with extensive use of suns, crowns, interlaced L's, the arms of France and Navarre, globes, wreaths and trophies and allegorical figures based on Cesare Ripa's Iconologia - all intended as a reflection of the sumptuous painted and stucco decoration on the ceilings above. In total all but one of the 93 projected carpets were woven between 1668 and 1688, with sixty supplied by the Lourdet family and thirty-two by the Dupont's.

In total all but one of the 93 projected carpets were woven between 1668 and 1688, with sixty supplied by the Lourdet family and thirty-two by the Dupont family. By the 1670s however, the King had abandoned the idea of making the Louvre his principal seat in favour of Versailles, and it seems unlikely the series was ever installed. The carpets remained in the possession of the Royal Garde-Meuble, some occasionally used in various royal residences and others offered as diplomatic gifts. During the torment of the Revolution several were sold to suppliers of basic goods and foodstuffs, and in 1797 the Directoire government gave 27 Grande Galerie carpets to the supplier Raymond Bourdillon as payment for horse fodder, including the present lot, which apparently returned into government possession before definitively leaving the national collections at an unknown date. Numerous examples were reduced in size and/or cut down and re-assembled, and many are still unrecorded and presumed lost. The French Mobilier National state collections still retain the largest surviving group of over fifty, and interestingly these were woven together and laid on the floor of the Hall of Mirrors in Versailles during the signing of the Treaty of Versailles in 1919, possibly the only instance of these carpets being used as they were originally intended. Other surviving carpets or fragments are in the Metropolitan Museum New York, the Philadelphia Museum of Art, The Huntington Art Museum and Waddesdon Manor.

A smaller fragment of this carpet assembled from two of the stag heads from the outer corners was sold Sotheby's Paris, 13 November 2018, lot 11. Another fragment depicting a landscape cartouche said to possibly form part of this carpet was sold Christie's New York, and though as Burchard argues, the archival description is too vague to definitively identify these panels as missing elements from carpet 43, and indeed the subjects a coastal scene with a castle, perhaps not the most appropriate landscape scene for a hunting theme. A fragmentary carpet of two allegorical bas-relief cartouches from the end sections of no. 50 in the series was sold Sotheby's London, 6 July 2016, lot 9 (GBP 341,000 with premium), and a large fragmentary carpet comprising the inner and outer panels of no.61, formerly in the Charles Deering collection, was sold Christie's New York, 24 May 2000, lot 315 (USD 1,326,000 with premium).