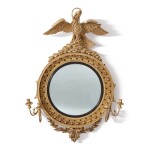 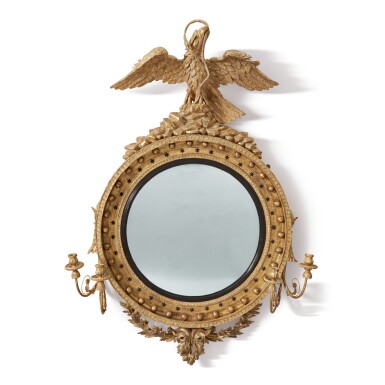 with a pair of two-light candle arms

In good conserved condition with some old repairs to carving, scattered repairs to leaf tips, rubbing and oxidation to gilding in places.

Convex circular mirror plates date back to the Middle Ages and were manufactured in France in the 18th century using moulds. They may have been imported to England, and Plate LXXVII of Ince and Mayhew's Universal System of Household Furniture (1762) illustrates eight designs for 'Frames for Convex or Concave Glasses which have a very pretty Effect in a well furnish'd Room', all of circular form with elaborate rococo surrounding elements. Few if any mirrors in this style survive today, so they must have been produced in very limited quantities at the time. The real fashion for this form began in the 1790s, possibly as a result of the trade disruption caused by the French Revolution, which spurred English manufacturers to develop products no longer able to be imported from France. Output of convex plates increased at the British Cast Plate Glass Manufacturers established at Ravenhead, St Helen's, Lancashire in 1773, and led to an explosion in popularity of the form, so much so that by 1803 Sheraton's Cabinet Dictionary defined a mirror as 'a circular convex glass in a gilt frame...by which the perspective of the room in which they are suspended, presents itself on the surface of the mirror, and produces an agreeable effect. On this account, as well as for the convenience of holding lights, they have now become universally in fashion, and are considered both as a useful and ornamental piece of furniture.'

This example is distinguished by its exceptionally large size and boldly carved eagle cresting. Eagles were common decorative elements on Regency mirrors, along with sea horses and less frequently dragons, all highly appropriate iconography for the themes of power, victory and maritime prowess so prevalent during the Napoleonic wars of the early 19th century. Egyptian motifs also appear, a result of awakened interest in the Near East following Admiral Nelson's campaign of the Nile. Egyptian heads appear on the candle arms of a large convex mirror bearing the label of Thomas Fentham, a London carver, gilder and frame-maker based in the Strand (formerly with Hotspur, London; illustrated in C. Gilbert, Pictorial Dictionary of Marked London Furniture 1700-1840, Leeds 1996, p.204, fig. 344). Fentham was also a glass-grinder and several mirrors of comparable design and scale to the present lot bearing his label are recorded. Another mirror of a similarly large size was in the collection of Mr & Mrs Stephen C. Hilbert, sold Sotheby's New York, 24 May 2007, lot 76 ($90,000 with premium).