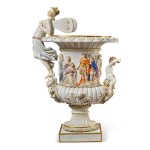 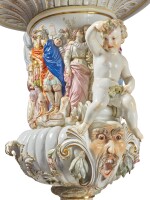 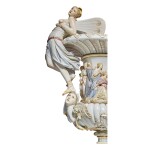 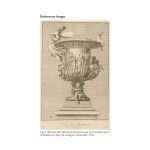 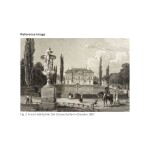 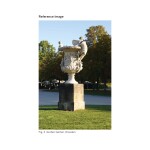 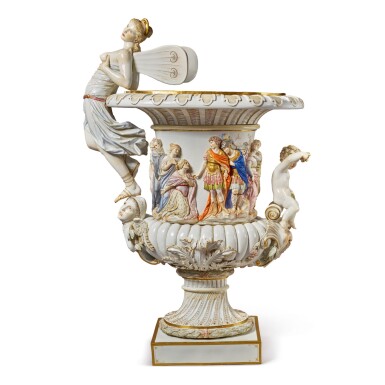 after the marble by Antonio Corradini (1688-1752), modeled by Rossmann, with a large figure of Psyche at one side, the central section modeled in high relief with a continuous scene depicting an episode of the Triumphs of Alexander the Great, he standing before the kneeling mother of Darius, the lower lobed section with scrollwork ornament, one side with a bacchic mask, the other with a female head, crossed swords marks in underglaze-blue, incised numeral 0165, impressed numeral 100.

Overall, the appearance of the vase is good. The vase is formed of seven separate sections which are secured by metal screws. Previously, this vase was stabilized at the joints by plaster which has since been removed. The piece will require extra stabilization when placed. To rectangular foot, there are areas of spray at the corners and the outer edges, which have probably been restored. The cupid's right, raised arm, restored. An element at the rim lacking. The piece could benefit from a light clean. The rim section with a flat chip to the gilded edge, measuring approximately 2cm at widest point. Some scattered wear to gilding.

This extraordinary model was a feat of production by the Meissen manufactory. Bold in its scale it was first produced at Meissen in 1891 by the modeler Rossman, and is thought to have been made only a few times. A further example exists in the Meissen Foundation, Meissen, Germany.

The present vase is a porcelain copy of a marble originally in the Royal Collections of Saxony in Dresden, one of several marbles commissioned from Antonio Corradini (Venice 1688 - 1752 Naples) by the King of Poland and Elector of Saxony, Augustus the Strong, between 1723 and 1728 for the for the gardens of the Höllandisches Palais (later known as the Japanese Palace) in Dresden. The commission also included life-sized figures of Nessus and Deianira, Apollo Flaying Marsyas and Zephyrus and Flora. In 1733, the year of the King's death, Augustus the Strong's collection of marbles, including works by contemporary sculptors, was listed and compiled with an engraving of each entry by the court architect Raimond le Plat in Recueil des Marbres Antiques qui se trouvent dans la Galerie du Roy de Pologne a Dresden. The marbles commissioned from Corradini are listed under 'Svite de Divers Marbres Mordernes &c.', where the marble vase that inspired the present lot is listed as '219 Vase a Basrelief (fig.1). The marble sculptures of Apollo Flaying Marsyas and Zephyrus and Flora were sold in 1836 and sometime later entered the collection at Eaton Neston, Northamptonshire, where they were recorded in 1902. They were subsequently acquired by the Victoria and Albert Museum, London, acc. nos. A.6-1967 and A.5-1967. It seems the bas relief marble vase, which was the model for the present lot, remained in Dresden, appearing in an engraving by Franz Hablitschek, circa 1856, where it is situated in front of the Sommerpalais in the Großer Garten, Dresden (fig.2). Today a replica of the vase stands in the Großer Garten (fig.3).

Sotheby's is grateful to Meissen for their assistance in the cataloging of this lot.