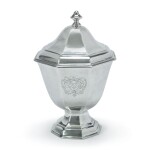 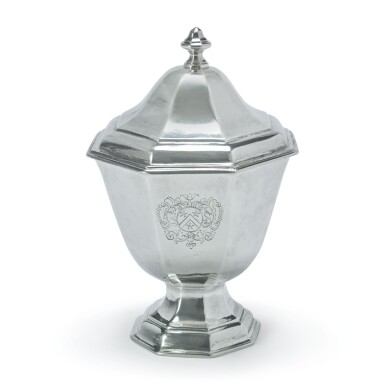 marked on base and cover, maker's mark WP pellet between possibly for William Parker

Inside cover with some silver solder in one angle- original? The body a bit bright.

John McCormack and Conor O'Brien, A Celebration of Limerick's Silver, 2007, p. 207, which discusses a business connection between William Parker and Samuel Monsell, Esq. through the sale of a piece of property, which could account for the maker's mark WP on this sugar bowl, as well as other pieces of Monsell plate.

The arms are those of Monsell of Tervoe. This formed a part of the Monsell family plate, much of it Irish, early 18th century and engraved with the arms and sold at the above-cited sale, lots 111 through 152. Within this group, also by the maker W.P., Dublin, 1715, were a pair of two-handled cups (lot 140) and a pair of tazze (lot 141). The collection also contained pieces by early Dublin makers William Williamson, Erasmus Cope, Joseph and Matthew Walker, John Hamilton, and Robert Calderwood.

William Monsell of Tervoe entered Trinity College, Dublin in 1722, and married a daughter of the Rev. Richard Burgh, of Dromkeen, co. Limerick. In the next generation, Col. William Thomas Monsell of Tervoe married in 1776 Hannah, daughter of Amos Stretthel, Esq. of Dublin. The Monsell family was elevated to Baron in 1874 as William Monsell, first Baron Emly, who married first in 1846 Lady Anna Maria Charlotte Wyndham-Quin, only daughter of the second Earl of Dunraven. She died in 1855 and he married secondly in 1857, Bertha, youngest daughter of the Count de’Montigny. His lordship represented County Limerick in Parliament from 1847 to 183, was clerk of the Ordinance from 1852 to 1857, and president of the Board of Health 1857-58. In 1866, he was appointed vice-president of the Board of trade; from 1868 to 1870 was under-secretary of State for the Colonies, and Postmaster-General from 1870 to 1873.

He became a Roman Catholic in 1850 and Aubrey DeVere says that he was “amongst those who worked hardest” in the great Irish famine. His son Thomas, second Baron, gentleman usher to the Viceroy of Ireland, 1882-1885, was removed from the Commission of the Peace in November 1899 for making inflammatory and disloyal speeches (The Complete Peerage).

This form of elongated octagonal sugar bowl is distinctly Irish. Other examples include one by Joseph Walker, Dublin, 1717, illustrated in John D. Davis, The Genius of Irish Silver: A Texas Private Collection, no. 56, pp. 29, 31, and one Dublin, 1714, no maker’s mark, in Sterling and Francine Clark Art Institute (Wees no. 267, pp. 379-80).

For an Irish salver from this collection see lot 638.