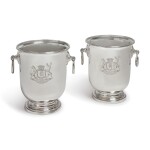 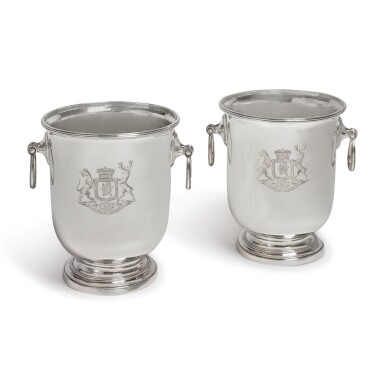 marked on bases, one with maker's mark but unclear

One with extensive repairs around each handle. Both with minor dings to lower body, and the bases dented so they wobble slightly.

The arms are those of Dundas, Viscount Melville, probably for Henry 1st Viscount Melville, PC, FRSE, 1742-1811, 1st Secretary of State for War, and became in 1806 the last person to be impeached for misappropriation of public money, although acquitted, he never held public office again.

A similar set of four Sheffield plate wine coolers, circa 1790, engraved with the Royal arms were supplied to Alleyne FitzHerbert (1753-1839), who served as Ambassador to Madrid, 1790-94, sold Christie's London, January 22, 2009, lot 575. It is possible that they served as the model for the present pair.