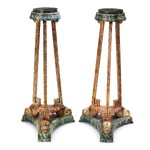 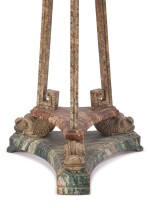 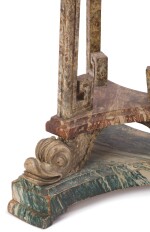 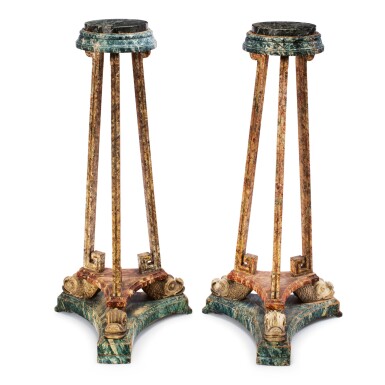 With assorted losses and chips to painted decoration and minor age cracks consistent with age. Decoration refreshed in places with later varnish, slightly yellowing in places. Both marble tops with restored breaks. Handsome and unusual design and very sturdy, ready to use.

James Newton (1760-1829) trained under Lawrence Fell and William Turton and became a master cabinetmaker in 1781, based in Wardour Street, Soho, London. He successfully transitioned from the Sheraton style of the late 18th century to the more Empire taste of the Regency Period, strongly influence by the designs of Thomas Hope. One distinguishing characteristic that appears in his work is colourful surfaces painted to simulate marble or porphyry, seen for example on an occasional table acquired by the 1st Earl Brownlow at Belton House, Lincolnshire; a pair of console tables at Castle Howard, Yorkshire, and a simulated marble and porphyry base supplied to Matthew Boulton for his Sidereal Clock at Soho House, Birmingham (see G. Ellwood, ‘James Newton’, Furniture History XXXI, 1995, p.129-205, figs.49, 62-63).

Crowe Hall, one of the finest houses on the Seven Hills surrounding Bath, was originally built in 1760 for Brigadier Crowe. In the 19th century it was owned by the Tugwell family, who laid out the property's historic gardens. From 1960-2010 it was inhabited by Sir Sydney Barratt (1898-1975), a distinguished chemist, professor and industrialist who served as an advisor to Winston Churchill during the Second World War.