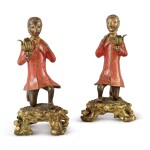 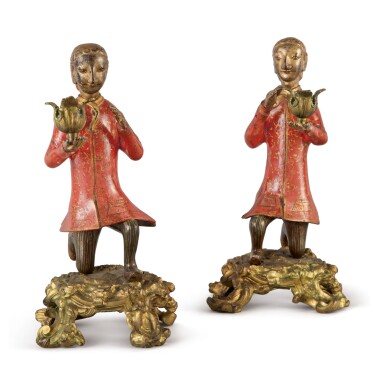 slight variations to size and design of figures and mounts

In good condition with areas of scattered rubbing and oxidation to gilt and lacquered surfaces. Remnants of wax residue in candle nozzles.

These highly rare candelabra appear to derive from Chinese porcelain models of Europeans exported to the West in increasing quantities from the beginning of the 18th century. These were based on imported engravings, as most Chinese ceramic artists would never have seen a European in person, and tended to result in figures with faces of somewhat ambiguous ethnicity wearing occidental-style dress. A pair of porcelain figural candleholders in the Copeland Collection at the Peabody Essex Museum depict a standing man and woman in European clothing each holding a golden bowl in one hand and a large lotus leaf nozzle in the other, a popular motif in export porcelain and similar to those held by the figures in the offered lot (ill. in W. R. Sargent, The Copeland Collection, 1991, no.62 p. 136-37). Their gesture has been interpreted as an expression of the tribute that all foreign traders and visitors regardless of status were expected to pay to the Emperor, and the kneeling pose of the present pair could also be regarded as evoking this custom.

Small lacquered bronze figures mounted as candelabra, paperweights or clock cases were developed by the Paris marchand merciers during the 1730s and 40s, but these were manufactured in France and represented figures of distinctly Chinese physiognomy in Asian costume. Notable surviving examples include a clock garniture in the Residenz, Munich; a pair of two-light candelabra with porcelain flowers from the Madame Djahanguir Riahi Collection, sold Sotheby's Paris, 6 July 2017, lot 53; and a garniture in the Ortiz-Patino Collection, sold Sotheby's New York, 20 May 1992, lot 7. This taste formed part of a broader fashion for importing small Chinese or Japanese ceramic figures, frequently copied by European porcelain factories, to be mounted in gilt bronze. These were commonly referred to as pagodes or magots and proved so popular that Diderot despaired of such 'colifichets précieux' that had displaced more worthy ornements d’un goût beaucoup meilleur and created a règne des magots (see D. Kisluk-Grosheide, 'The Reign of Magots and Pagods', Metropolitan Museum Journal XXXVII, 2002, p. 177-198). In this context, the present lot represents a fascinating and extremely unusual example of European figures serving the same function as Chinese or Chinese-inspired magots.