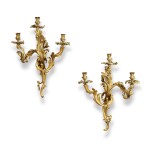 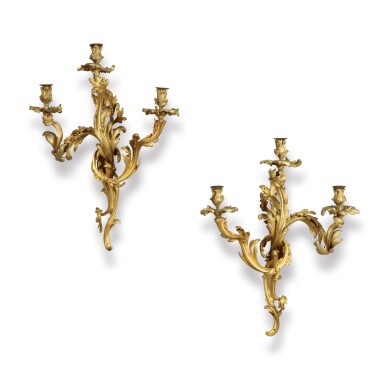 In overall good condition with a few very minor areas of rubbing and tarnishing to gilding. Wired for electricity. Impressive model and scale.

These wall lights are the same model as a pair sold from the Keck Collection at La Lanterne, Bel Air, California, Sotheby’s New York, 5-6 December 1991, lot 201, and subsequently in the Riahi sale Christie’s London, 6 December 2012, lot 22 (£181,250). These are almost identical to a pair marked with the crowned C attributed to Jean-Claude Duplessis, now in the Wrightsman Collection at the Metropolitan Museum (F.J.B. Watson, The Wrightsman Collection, New York 1966, Vol. II p. 415, nos.228 A and B). Two further similar pairs now divided between the Louvre and Versailles were recorded at Fontainebleau during the Empire period (P. Samoyault, Fontainebleau, Pendules et Bronzes entrés sous le Premier Empire, Paris 1989, p.123, fig.88).