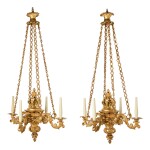 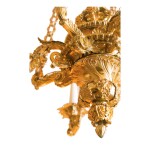 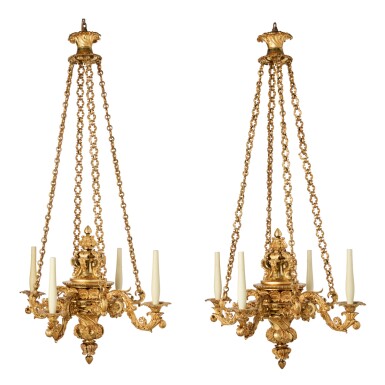 Gilding in good condition and nice color with only very minor scattered losses and oxidation. Wired for electricity.

The Earls of Pembroke, Wilton House (according to sale invoice)

En suite with the previous lot.

Although unmarked, this rare surviving group of four can be attributed to one of several prominent London purveyors of high-quality chandeliers and lighting fixtures during the late Regency and George IV periods, most likely Johnston Brookes & Co. at 31 New Street Square, who is known to have collaborated with William Collins at 227 the Strand. In 1823 both firms supplied four exceptionally large chandeliers to the 3rd Duke of Northumberland at Northumberland House in the Strand. These no longer survive intact, but fragments of each have been converted into four standing vase ornaments, each stamped MANUFACTURED by JOHNSTON BROOKES & CO, 32 New Street Square / FOR WM COLLINS, 227 Strand, 1823; these were sold Christie's London, 17 November 1988, lots 102-103, and one pair later at Sotheby's New York, Property from the Collection of Lily and Edmond J. Safra, 19 October 2011, lot 739. William Collins also delivered a set of four gaslight standing candelabra placed at the foot of the main staircase, which are now divided between Syon House and the Bowes Museum.

Another possible maker is the firm of Hancock and Rixon at 1 Cockspur Street, whose clients included George IV at Windsor Castle and The Marquess of Westminster at Eaton Hall. In c.1830 they supplied gilt brass chandeliers to the Duke of Stafford at Stafford House, London, three of which were later in the Dining Room of the 2nd Viscount Leverhulme at Thornton Manor, sold Sotheby's London 26-28 June 2001, lots 168-170. A similar gilt-brass chandelier to lot 168 in the sale, stamped Johnston Brookes & Co., is currently on the London art market.