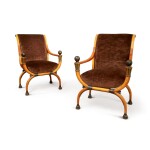 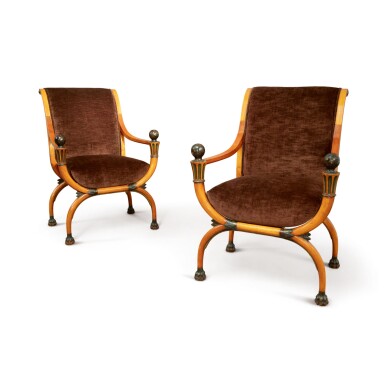 This form is referred to as a curule chair, based on the the antique Roman sella curulis (said to derive from currus, ‘chariot’), a curved X-frame seat reserved for magistrates and other high-ranking officials, and thus an appropriate design to project power and status. It became extremely popular in the context of the the more archaeologically-inspired neoclassicism of the Consulat and early Empire periods, influenced by the continuing excavations at Herculaneum and Pompeii and Napoleon’s Egyptian campaign, recorded visually by the Baron Vivant-Denon in his Voyage dans la Basse et la Haute Egypte published in 1802. An early drawing for a chair of this design, attributed to the architect Charles Percier, is in a private collection, and several chairs of this model by or attributed Georges Jacob (1739-1814, maître in 1765) including two in the French National collections, are illustrated in J-P Samoyault, Le Mobilier Français Consulat et Empire, Paris 2009, p.27 figs. 25-28.