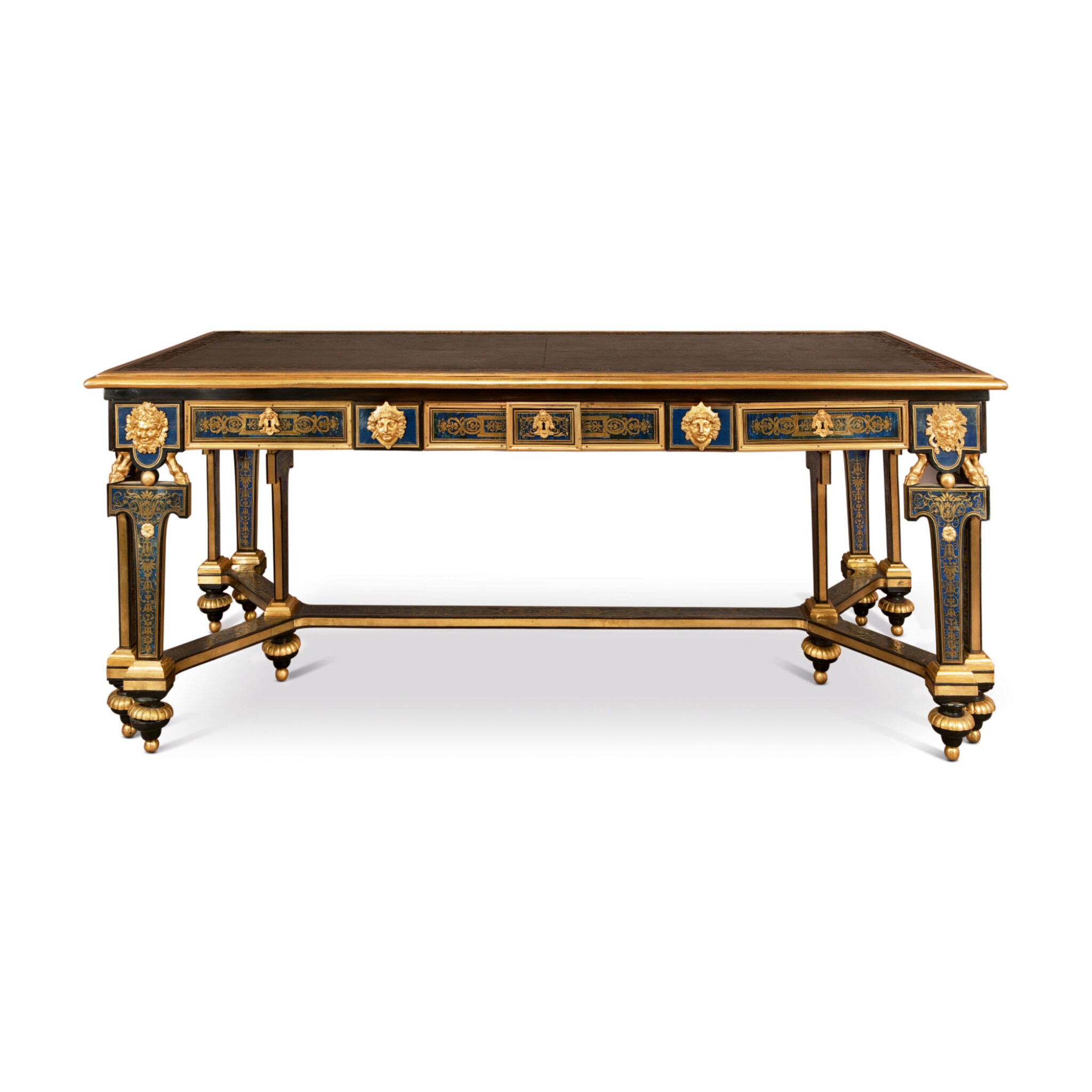 This impressive table appears to be a second version of a library bureau commissioned by Baron Alfred de Rothschild (1842-1918) for Halton House, Buckinghamshire, sold Sotheby's London, Treasures, 5 July 2017, lot 43. A scion of the English Rothschilds, Baron Alfred was director of the Bank of England for 20 years and an important collector and art patron, serving as a trustee of the National Gallery and the Wallace Collection. Halton House was built between 1880 and 1883 in the style of a French château and was one of a group of Rothschild country houses constructed in the Vale of Aylsebury in the 19th century, along with Mentmore, Waddesdon and Ascott. The desk appears in a photograph of the Red Room at Halton in c.1888 (reproduced in B. Lastic, 'A display of opulence: Alfred de Rothschild and the visual recording of Halton House’, Furniture History 2004, p. 141, fig. 4). The desk was later in the possession of the New York collector Archer Huntington, very possibly from the important collection of French decorative arts he inherited from his mother Arabella Huntington (1851-1924), over three hundred pieces of which he donated to the San Francisco Legion of Honor Museum in 1926. The desk formed part of this gift and remained with the museum until sold Christie's New York, 29-30 November 2012, lot 220 and subsequently in London in 2017.

The present table is identical in design and size to the Halton/Huntington table with the same leather top embossed with a crowned H border and only slight variations to the mounts. The latter table has been attributed to the mid-19th century London cabinetmaking firm of Blake & Co. based on its similarity to a larger library table with identical legs and Bacchus mask and goat's hoof mounts acquired by Alfred's uncle Mayer de Rothschild at Mentmore in 1853 (sold Sotheby's Mentmore sale, 18 May 1977, lot 52). The provenance given at the time of purchase was a gift from Louis XVIII to the Duc d'Orléans at the Château de Neuilly, although the work could conceivably emanate from the same workshop as the Halton table. Blake & Co. specialised in manufacturing high-quality copies of Louis XIV Boulle furniture, notably four copies of the celebrated commodes supplied by Boulle to the Grand Trianon in 1708 probably commissioned by the 4th Marquess of Hertford in 1853 (one pair now in the Frick Collection). The firm is known to have carried out work for Alfred's father Baron Lionel Nathan between 1857 and 1865 and would have been more than capable of creating a table based on the Mentmore model.

After the death of Baron Alfred in 1918, Halton was inherited by his nephew, the Conservative politician and banker Lionel de Rothschild, who sold the house and its contents and used the proceeds to purchase Exbury estate in Hampshire, where he restored the Georgian house and created extensive ornamental gardens, which are today open to the public. The probate valuation taken after Lionel's death in 1942 lists this table in the Dining Room at Exbury, the contents of which were auctioned in London on 4 July 1946 where the table was lot 151 and sold to Camerons: BOULLE WRITING TABLE, with three drawers, the frieze inlaid with arabesques in brass on blue tortoiseshell ground in imitation of lapis lazuli, mounted with ormolu bacchanalian masks and goats hoofs, supported at each end by five legs with shaped stretchers, the top covered with stamped and gilt black leather.  It is not known when this table was commissioned, as the 1918 Halton probate valuation only records one table of this design in the house, so the second example must either date from after Alfred's death or was kept in a different residence before passing to his nephew.