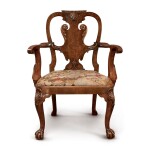 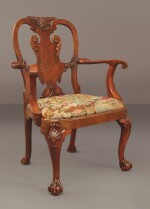 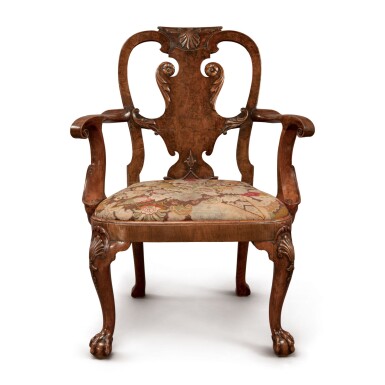 the back seat rail bearing the trade label: GILES GRENDEY / In St. Jon's-Square, Clerkenwell / LONDON / makes and sells all sorts of cabn. / goods, chairs, and glasses.

In good condition with usual minor wear and age cracks particularly on splat, visible in catalogue photo. Repairs to stiles and one front talon, and splices to back feet. Surface a rich warm color with light wax polish. Some old worm holes on seat rails. One small (approx. 1/2 inch) loss to veneer of proper right seat rail.

﻿ NOTWITHSTANDING THIS REPORT OR ANY DISCUSSIONS CONCERNING CONDITION OF A LOT, ALL LOTS ARE OFFERED AND SOLD "AS IS" IN ACCORDANCE WITH THE CONDITIONS OF SALE PRINTED IN THE CATALOGUE.

Possibly one of the armchairs visible in photographs of the hall and library at Sprotborough published in Country Life, 11 February 1922

This chair is part of a larger set possibly supplied to the Copley (later Bewicke-Copley) family of Sprotborough Hall, Yorkshire, where three chairs and two armchairs were recorded in 1922, a few years before the house's demolition. The offered armchair and three side chairs from the suite from the J. S. Phipps Collection, Old Westbury, New York, were sold Sotheby's New York, 21 November 1981, lots 233-35. Of the side chairs, one is now in the Art Institute of Chicago and another in the Carnegie Museum, Pittsburgh. A further side chair is in the Crab Tree Farm collection, Chicago. Other side chairs from the suite are illustrated in Edwards, Vol I, p. 257, fig.95, and Macquoid p. 206, fig. 192.

Giles Grendey (1693–1780) was one of the most important cabinetmakers working in London in the 18th century. Born in Gloucestershire, he was in the capital as an apprentice to William Sherborne at the age of 16. By 1731 he had established his workshop in St John's Square, Clerkenwell, which operated until at least 1755 and was a large enterprise serving both domestic and overseas client. Grendey is particularly noteworthy for his chair production, and a number of examples bearing his label survive. Many also bear stamped initials thought to represent journeymen from his workshop, and the present armchair bears the initials ID and IC which appear on all the recorded examples from the set. It has been suggested by Dr Adam Bowett that the ID mark, which is impressed, refers to a workmen's stamp, whereas as the IC is larger and appears to be branded, suggesting it may be an inventory mark, possibly referring to the owner of Sprotborough Hall, Joseph Moyle, who took the name Copley upon inheriting the estate through his wife, the daughter of only surviving heir of Sir Godfrey Copley, 2nd Baronet (1653-1709).