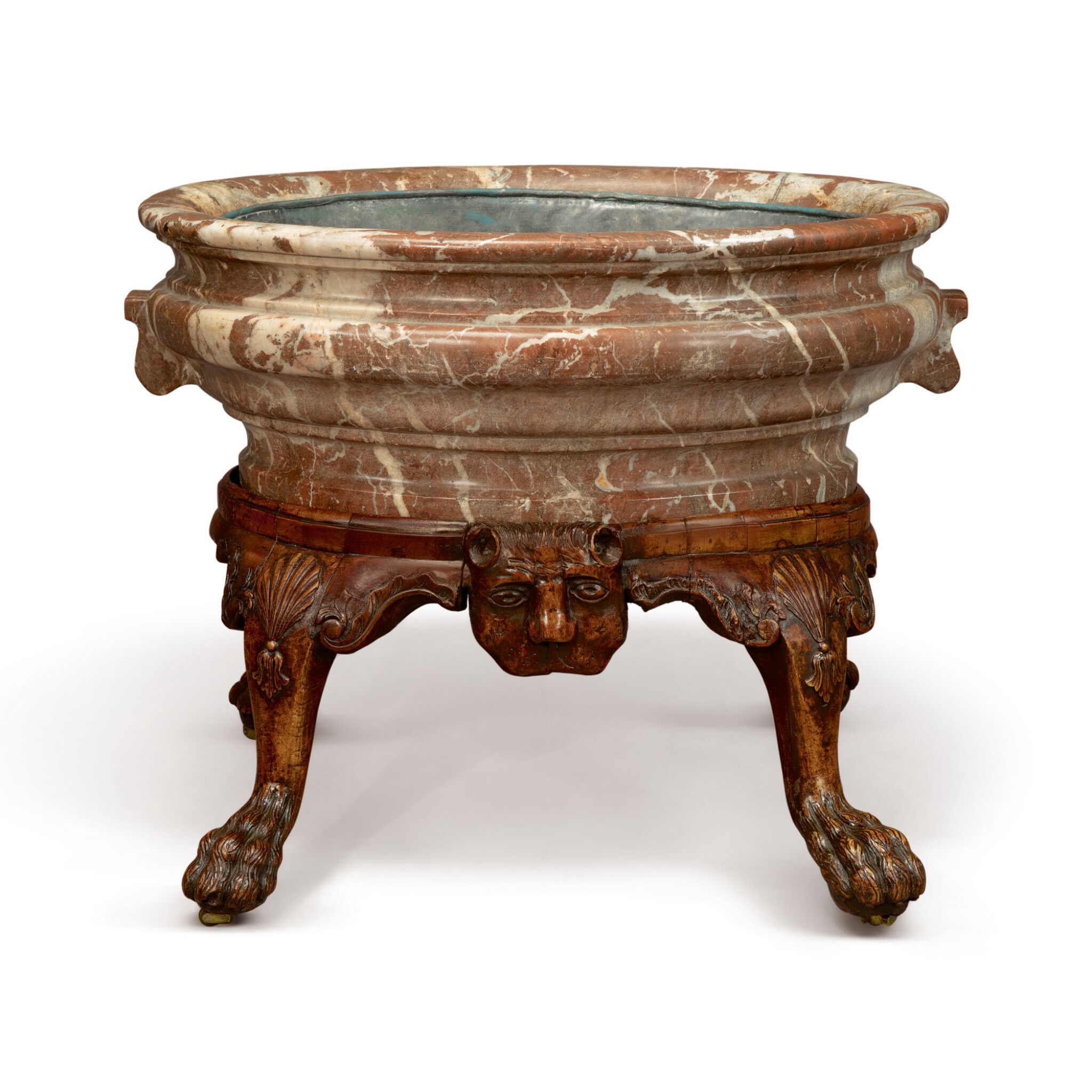 Wine cooler in good condition overall with old repair to one leg and scattered minor scuffs and losses throughout. Old repaired breaks to marble cistern, these are well done and not too visible. Led liner is fixed into cistern. Extremely rare model with good old color and patina.

Large antique-form wine cisterns based on silver models became fashionable in the early Georgian period, under the classicising influence of William Kent. This lot is related to a small group of 'lion claw wine coolers' with both the lion-paw base and cistern carved out of mahogany, the prototype for which is a 'neat mahogany cistern' supplied by the Soho cabinetmaker John Hodson to the 2nd Duke of Atholl at Blair Castle, Scotland, in 1738. Similar examples, all in mahogany and attributed to Hodson, include one from the Neuhoff Collection, sold Sotheby's New York, 25 January 1986, lot 194; another from the H. J. Joel Collection, Childwickbury St Alban's, sold Christie's on the premises, 15 May 1978, lot 84; a further example at Christie's New York, 14-15 April 2011, lot 478, and another illustrated in R. Edwards and P. Macquoid, The Dictionary of English Furniture, London 1954, Vol.III, p. 372 fig. 3. A mahogany wine cooler designed in a similar spirit with lion's paw feet headed by satyr's masks was formerly with the Earls of Spencer at Althorp House, possibly supplied to Sarah, Duchess of Marlborough and attributed to Benjamin Goodison, sold Christie's London, Spencer House, 8 July 2010, lot 1029.

The offered lot appears to be the only recorded example of this form in walnut, and the combination of the paw foot with shell-carved knee is more reminiscent of legs seen on Irish Georgian decanter stands, such as one from the Messer Collection, sold Christie's London 5 December 1991, lot 103 a second in the Winterthur Archive, both illustrated in the Knight of Glin and J. Peill, Irish Furniture (New Haven and London 2007), p. 246 figs. 176, 179.