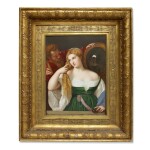 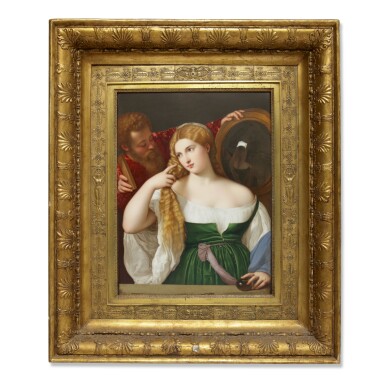 after the painting by Titian (1488-1576), possibly painted by Marie Victoire Jaquotot, the woman gazing into a mirror held by an attendant at the reflection of her hair in a convex mirror behind her, printed crowned interlaced LL's in blue within a laurel wreath, incised L, in a contemporary gilt-metal and gilt-wood frame.

The plaque is in overall good condition and appearance. The plaque is intact. There are some scattered small flakes to the green enamel of the female figure's dress, as visible in the catalogue illustration. The frame, probably the original, with some losses to gilt-wood, and general wear.

During the early 19th century, under Brongniart's tenure as Director of the Sèvres manufactory, a project was begun to have the factory's porcelain painters copy old master paintings on porcelain panels for posterity. In 1817 the Comte de Forbin, Director of the Musée Royal (now The Louvre), allowed the painters from Sèvres to study paintings in the Royal Collection and on some occasions allowed paintings to be lent to Sèvres for artists to copy, as noted in Tamara Préaud, The Sèvres Porcelain Manufactory, Alexandra Brongniart and the Triumph of Art and Industry, 1800-1847, p. 86. Préaud writes that in 1820 additional Italian school examples were copied, including Leonardo's Mona Lisa copied by Marie Adélaïde Ducluzeau, née Durand (active 1818-49); and Correggio's Mystic Marriage of Saint Catherine copied by Abraham Constantin and which was included in the L'Exposition des Manufactures Royales at the Musée Royal in the same year. This plaque sold at Bonhams Los Angeles, June 10, 2013, lot 4423. Préaud writes that a third painting, depicting 'Titian's lover', copied by Marie Victoire Jaquotot (active 1801-42), was also included in the 1820 exhibition. Préaud continues that Titian's supposed portrait of his mistress was copied a further time by Béranger in 1833-35 (p. 89). Although the present plaque is not signed, the interlaced LL mark implies a production date of circa 1820 as opposed to 1833-35 when a different mark was being used. Therefore is it probable the present lot is the example that was included in the Musée Royal exhibition.

Jaquotot was a gifted portrait painter and attracted the patronage of Empress Joséphine and her daughter Queen Hortense of Holland. She traveled to Italy to copy works by Raphael, and in 1817 she copied Raphael's La Madonna dei Garofani (The Madonna of the Pinks) which is now in the Musée national de Céramique-Sèvres, and framed in a similar manner to the present plaque. The high quality of the present plaque further supports the possible attribution to Jaquotot.

Titian's painting, circa 1515, was originally in the collection of the Gonzaga family in Mantua who then sold it to Charles I of England. It was later acquired by Louis XIV of France in 1662 and is now in the Louvre, Paris.