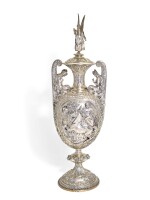 the body embossed in relief on one with the profile of Queen Victorian between flags and inscribed ‘ROYAL LONDON YACHT CLUB’ ‘1837 1887,’ the reverse cast in an oval with the contest of Minerva and Neptune, detachable cover with standing figure of Victory, mermaids at the handles, the foot stamped: 'HANCOCKS & CO. 39. BRUTON ST. LONDON B 30'

'Sailed for at Cowes [Isle of Wight], under the auspices of the Royal London Yacht Club, the race for the Jubilee Cup between the cutters Irex [owned by John Jameson] and Neptune [owned by W.T. Birchall] was one by the latter, who just managed to save her time.' (The Daily Telegraph, London, Tuesday, 2 August 1887, p. 4g)

Another version of this vase and cover, with different panels and figure terminal, presented to W.H. Smith, M.P. for Westminster, was exhibited by Hancocks at the International Exhibition, London, in 1871. The description of that piece, which also applies (except for the panel of Queen Victoria) to the present example, reads: 'The highly ornamented body and handles are designed by OWEN JONES [1809-1874]; the Medallion and [figures to the] handles are modelled by Signor [Raffaele] MONTI [1818-1881].' (The Art-Journal Catalogue of the International Exhibition, 1871, p. 6)

'The Jubilee Cup has been manufactured by Messrs. Hancocks and Co., the well-known art-workers in silver; it was designed by Signor Monti, and is considered to be one of his finest works. The cup is surmounted by the figures of Victory holding a wreath to crown the winner; on each handle is a finely-modelled figure of a sea-nymph. One medallion represents the contest between Minerva and Neptune as to who should produce the most useful gift to Mankind, Minerva producing the tree, and Neptune creating the horse by striking the rock with his trident. The reverse side has a bust of her Majesty the Queen, modelled from the new coinage [after Joseph Edgar Boehm], with flags of the Yacht Club on each side, and the name of the club, and the two dates, 1837 and 1887, in bold relief. The cup is of silver, partly gilt. Its rich ornamentation was specially designed by Mr. Owen Jones. The cup was won on Tuesday [2 August 1887] by the cutter Neptune.' (The Illustrated London News, London, Saturday, 6 August 1887, p. 154b, with engraving)