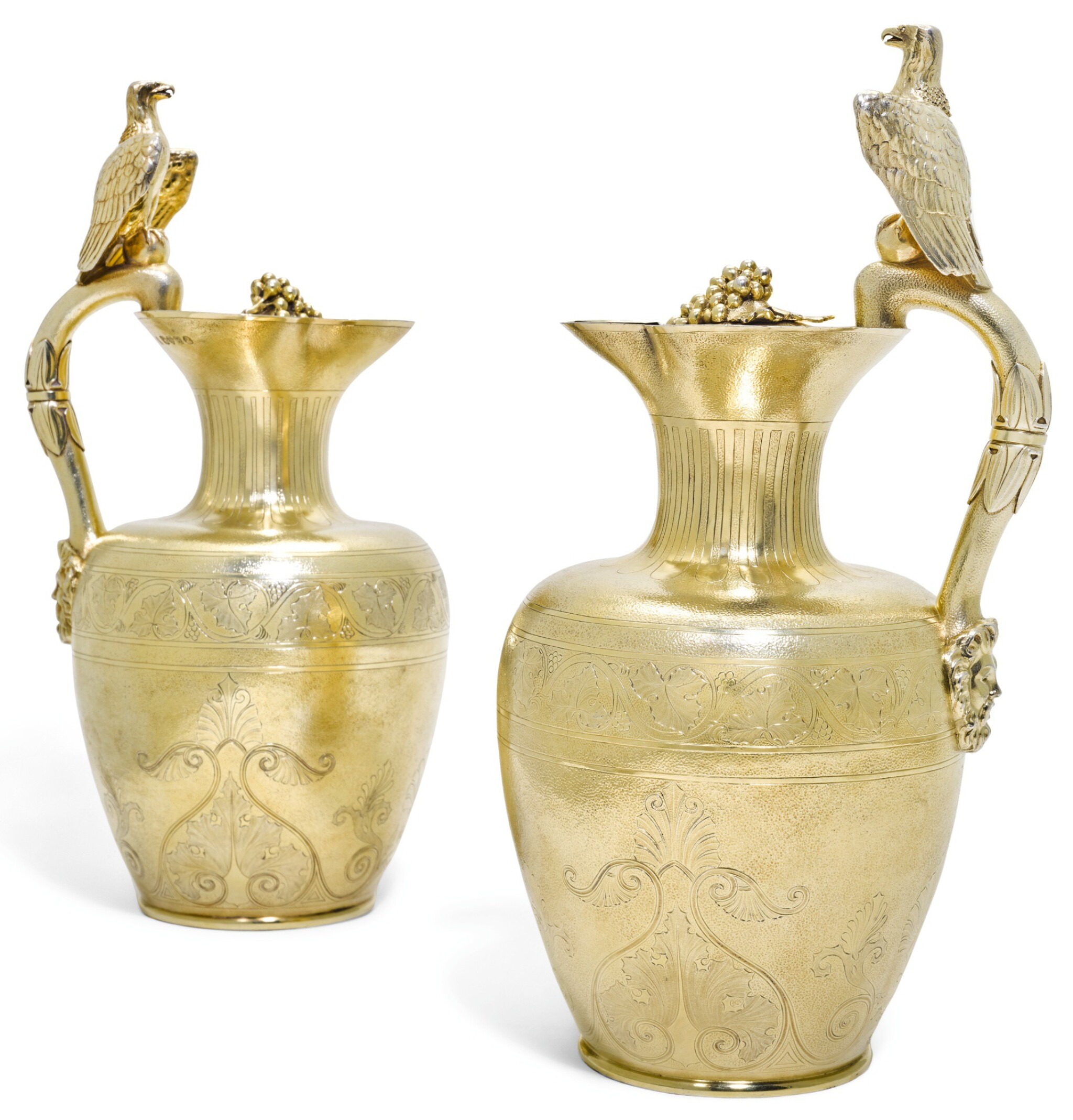 inspired by an antique oinochoe, each of the bodies matted and flat-chased with anthemions and tendrils below a frieze of stylised grape-laden vine laves, trefoil lips, the handles springing from bearded masks and each surmounted by an eagle, the detachable covers with cast grape and matted leaf finials and engraved with the royal arms as borne by William IV and an inscription, the undersides engraved with a coat-of-arms, motto, supporters and baron's coronet, further stamped: 'RUNDELL BRIDGE ET Co. AURIFICES REGIS LONDINI,' the handle and cover of the first stamped '2'

Thomas Reynolds-Moreton (1776-1840), 4th Baron Ducie of Tortworth, created in 1837 Baron Moreton of Tortworth and Earl of Ducie, then by descent to

The inscriptions read: ‘From His Most Gracious Majesty to Thomas Lord Ducie 1834.’

The exchange of gifts between William IV and Lord Ducie in 1834 comprised on one side these jugs and on the other an engraved tankard in the Norwegian style, maker’s mark of John Plummer, York, 1681. The latter is engraved with the royal arms, the arms of Ducie and the inscription: ‘Presented to His Majesty William the Fourth by the Lord Ducie 19th Dec. 1834.’ See A.E. Jones, The Gold and Silver of Windsor Castle, Letchworth, 1911, p. 24, pl. XII. Additional information about this tankard kindly supplied by Kathryn Jones, Senior Curator of Decorative Arts at the Royal Collection Trust, states that it is further engraved with the arms of Lytton and scratch marked on the underside, 'E. Arnold 1824 / G.N. Mimms [?] / 1831.'

From the sale of the Earl of Ducie’s silver at Christie’s, London on 7 October 1959, it is clear that Thomas Reynolds-Moreton, 4th Baron Ducie (1776-1840), who succeeded to the title upon the death of his father in 1808, was a customer of Garrard’s and Storr & Mortimer as well as Rundell, Bridge & Rundell. The style of the latter was changed upon the death of its then senior partner, John Bridge (1755-1834), to Rundell, Bridge & Co. Although Storr’s connection as superintendent of Rundell’s Dean Street, Soho silver factory had expired on 18 February 1819, the workshops there were maintained (at first under the direction of Cato Sharp (d. 1832)) until the premises were sold in 1834. Thereafter, the responsibility for making much of Rundell’s silver fell to John Tapley & Co. and to Bateman & Ball (successors to Hester Bateman’s business) in Bunhill Row, Clerkenwell. Tapley’s, headed by John Sparkes Tapley, was installed by September 1835 in premises (probably owned by Rundell’s) at 4 Horse Shoe Court alongside Rundell’s newly rebuilt shop, the Golden Salmon, 32 Ludgate City. Intriguingly at different times between about 1804 and 1817, both Cato Sharp and John Tapley lived within walking distance in Greenwich and Camberwell of the workshops run by Benjamin Smith who between 1802 and 1808 had been Paul Storr’s predecessor as Rundell’s chief silver manufacturer. The inference is that both Sharp and Tapley had been workmen at Smith’s factory. While Sharp was a native of Birmingham (Benjamin Smith’s home town), where he was married in 1802, Tapley, the son of a London silversmith, was apprenticed on 3 April 1805 to Paul Storr, then of Air Street, Piccadilly. The working relationships between these men throw light on the largely forgotten intricacies of the manufacturing silversmiths’ trade of the late 18th/early 19th centuries.