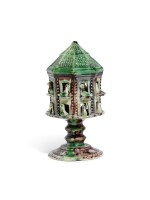 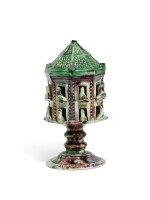 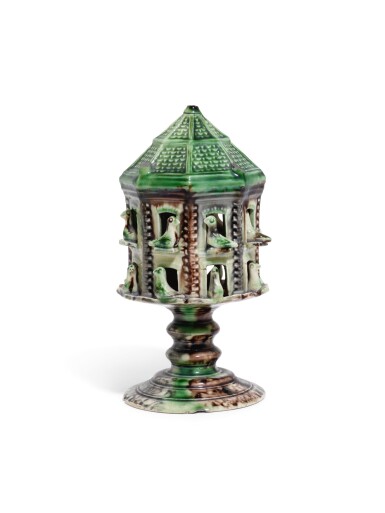 of Wheildon type, typically formed as an octagonal house, the roof tiled, the two-storey body pierced with apertures, each with a shelf supporting a dove, arranged around a door panel below the title PAVILION, on a shaped plate supported by a knopped and stepped foot,

Overall of good appearence with some typical losses and repair but no restoration or replacement.

The damages and losses to this piece are quite obvious but could be easily address by a good restorer. The overall look is honest and untouched which is very attractive. The door panel has quite a visible crack across it and the moulded title PAVILION above the door is slightly obscured by a perch and bird. The modelling is good, the moulding to the roof tiles and edges is crisp, the turning of the knopped stem and foot is very clean. The glazes are a good bright colour with a good balance of green, brown and grey to the main body and predominantly green to the roof.

The form of the present dovecote apears to derive from Staffordshire white salt-glazed stoneware, in particular the teawares modelled as Georgian brick houses, see Diana Edward and Rodney Hampson, White Salt-Glazed Stoneware of the British Isles, Woodbridge 2005, p. 85, col. pl. 56. A similar dovecote was sold in these Rooms, 25th February 1986, lot 87, and is probably the example in the Henry H. Weldon Collection, see Leslie B. Grigsby, The Henry H. Weldon Collection, English Pottery, Stoneware and Earthenware 1650-1800, London, 1990, pp. 404-5, no. 248. Another similar example was sold in these Rooms, 21st July 1981, lot 55. A further model of a dovecote with a plain tapering foot was sold in these Rooms, 25th May 1993, lot 202. A related form with a domed foot is in the collection of the British Museum, see R. L. Hobson, Catalogue of the Collecton of English Pottery in the Department of British and Mediaeval Antiquities and Ethnography of the British Museum, London, 1903, p. 195, no. H2, pl. XXVI where the author refers to a similar model lost in the Alexandra Palace fire of 1873. A similar example with a domed foot was sold in these Rooms 19th November 1991, lot 103 and two are in the collection of the Metropolitan Museum of Art, New York, acc. nos. 40.171.7-8, donated by Mrs. Francis P. Garvan in 1940 who acquired them from Frank Partidge in 1923.