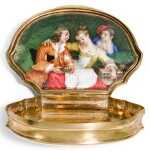 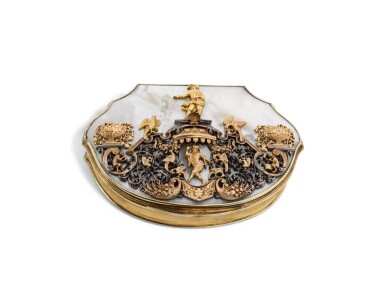 of cartouche form, the mother of pearl lid applied with finely-chased gold, silver-gilt and silver openwork scrolls enclosing a harlequin below a baldaquin, surrounded by symmetrical silver scrollwork set with a flute-playing squirrel, a drum-playing monkeys, eagles and cornucopiae, crowned by an arch supporting the figure of a peasant sprinkling fine gold seeds, in the manner of André Berain, the sides, base and interior of polished silver-gilt, the lid interior with a miniature on ivory representing a bucolic scene of a young man presenting a bird's nest to a lady, her rival enviously observing the scene from the background, German school, first quarter of the 18th century, unmarked

This lot contains ivory and other restricted materials. Sotheby's recommends that buyers check with their own government regarding any importation requirements prior to placing a bid. For example, US regulations restrictor prohibits the import of certain items (including ivory) to protect wildlife conservation. Please note that Sotheby's will not assist buyers with CITES licence applications where a buyer elects to either collect or arrange their own shipping, nor will Sotheby's assist with the international movement of ivory/rhino horn by air, either as freight or through hand carry. Sotheby's shipping will only assist in shipping the lot to either domestic UK or EU destinations, where delivery is made by road transport. A buyer's inability to export or import these lots cannot justify a delay in payment or sale cancellation.

The snuff box in the present lot belongs to a small group of boxes attributed by Dr Walter Holtzhausen to the Saxon court jeweller Johann Melchior Dinglinger (1664 – 1731). All are characterised by their inventiveness, an extremely advanced technique and craftmanship, as well as typical designs after Bérain (Walter Holzhausen, 'Unbekannte Pretiosen von Joh. Melchior Dinglinger', Die Weltkunst, 1 April 1966). Another example belongs to the City Museum in the Southern German town of Biberach, birthplace of the Dresden court jeweller and his brother Georg Friedrich, the famous enameller. The Victoria & Albert Museum in London holds further example by Dinglinger, made of tortoiseshell in similar form, inlaid with gold piqué work (both op. cit)

Interestingly, one of Dinglinger’s earliest works was a Galanteriebüchse (small precious box) for the Elector Frederick August, even predating his membership of the goldsmith’s guild (Jutta Kappel, Dresdener Kunstblätter, 34, Dresden, 1989, p. 5), indicating that he was comfortable working on a small scale before developing his grander creations.

In 1698, Dinglinger was appointed Court Jeweller to Augustus the Strong in Saxony, which since the later Middle Ages had turned into one of the richest provinces in Germany because of the silver to be found in its mountains. From a very early point in time until the eighteenth century it was regarded as a major centre for the production of silver and gold work and mounted jewels (Joachim Menzhausen, Das Grüne Gewölbe, Leipzig, 1968).

One of Dinglinger’s earliest masterpieces, now in the Green Vaults in Dresden, is his golden coffee service (1697–1701), created for Augustus. It is worth comparing the distinct undulating leafy foliage on the base of the coffee pot as well as the architectural spacing of the various elements to those on the present box. The delicacy of the chasing, previously limited to gold, has now been extended to silver; Holzhausen also records a snuff box demonstrating a comparable refinement which Dinglinger executed in copper.

One of the sources for the box in the present lot was the whimsical drawings by the architect and designer Jean Bérain (1640-1711) and those by his son of the same name (1678–1726), known as grotesques (see fig. X). These designs soon served as a source of inspiration for many decorative artists, as can be seen in a boullework tortoiseshell toilet casket in the Metropolitan Museum, of a slightly earlier date than the present box, with a surprisingly similar figure of the harlequin, as well as the scrollwork (see fig. x).

The miniature in the present lot is painted in the manner of Gustav Klingstedt or Jean Mussard (1681-1754), the latter becoming master goldsmith in Geneva in 1699 and specialised in enameling for watch cases and snuff boxes (see Haydn Williams, Enamels of the World 1700-2000, The Khalili Collections, London, 2009, p. 279).