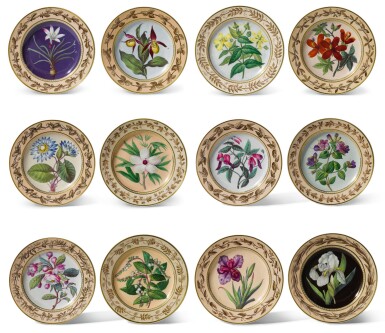 each painted with a botanical study, inscribed in black to the reverse with binomial Latin title and country of origin in French, each well gilt with a band of stylised leaves, the borders in shades of sepia with continuous bands of leaves, underglaze blue sceptre marks, stencilled Prussian eagle and various painter's marks,

In overall good condition. Some with a few patches of wear.

Pryus spectabilis has a small scratch to the pale-grey ground in the central well.

Clethra arborea has a few light scratches and a small patch of wear to the central well.

Pryus spectabilis has a small scratch to the pale-grey ground in the central well.

Known as the Chinese Apple Tree and thought to have been introduced to Europe in the 18th century and regarded as one of the most beautiful trees of an ornamental plantation. It was first published by Moritz Balthasar Borkhausen in his book Theorisch-praktisches Handbuch der Forstbotanik und Forsttechnologie, 1803

Sometimes known as the lily-of-the-valley tree, it is a native of the Azores and Madeira

Its common name is the Dusky Coral Pea, it is a native of eastern Australia. It was first published in 1793 by Dutch botanist, George Voorhelm Schneevoogt under the later rejected name of Glycine rubicunda (Dingy-flowered Glycine) in Icones Plantarum Rariorum. In 1804 it was published under its current name by French botanist Étienne Pierre Ventenat in Jardin de la Malmaison

Sometimes known as the Blue Egyptian lotus, it, along with the white variety is depicted in ancient Egyptian art and owing to its mildly sedative effects may be the plant consumed by the lotophagi or Lotus Eaters in Homer’s Odyssey

Known as Native Rosella, is endemic to rainforest areas of Eastern Australia.

Commonly known as Great St John’s Wort, it is found in North America and Asia

Today this tree mallow is known as the Salmon-red Canary Shrub Mallow, reflecting its origins in Tenerife

This `rain-lily` was named by Linneus in his second edition of Species Plantarum using the Native American `Atamasco`, it was re-categorised by William Herbert in 1821 retaining this later spelling.

Known as `Lady’s Slipper` orchid, its name derives from the Greek, literally Venus’s foot and the Latin `calceolus` for a small shoe. This is the largest variety of orchid in Europe.