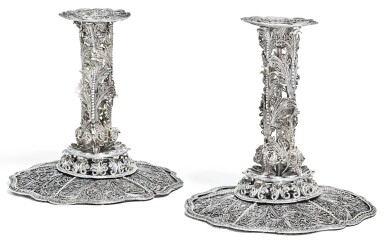 the openwork shaped circular bases rising to columnar stems and fixed nozzles, constructed in four sections around a central rod with thread terminal and nut tensioner, applied and fitted with stylized tulips and acanthus, between ropework and bead borders

The appreciation of filigree in Europe took on a passionate intensity during the 17th century. Louis XIV who was mocked as The Marquis de flligrane by the comte de Guiche (Mathieu da Vinha and Raphäel Masson, Versailles, Paris, 2015, footnote 31), led the way and converted the Grand Cabinet of Louis XIII’s hunting lodge into the Cabinet de Filigrane at Versailles in 1665. The fashion was widespread. Louis XIV inherited a considerable amount of filigree from his mother Anne (1601-1666), daughter of the king of Spain and Portugal, while his sister-in-law Margaret Therèse (1651-1673) also of Spain and Portugal brought a dowry of filigree when she married the Emperor Leopold I in 1666.

While the demand was supplied by local goldsmiths, filigree was also imported in the 17th century from areas making up the Maritime Silk Road, including India, China, the Philippines and Sumatra. This is probable the case with these candlesticks. They are European in taste following the normal 17th century pattern of candlesticks with outsized foot, below a section of smaller diameter, knopped columnar stem and nozzle in the same shape as the foot, but the baroque flowers include a shape like a stylized bean pod found on filigree associated with the East. Notable among these is a box in the Rijksmuseum (ref. AK-RAK-2017-22), catalogued as Batavia (old name for Jakarta, Java) 1700-1710, which belonged to Pietronella van Hoorn, who was daughter and granddaughter of successive governor generals of The Dutch East India company. (V.O.C), see: Karina H. Corrigan, Jan van Campen and Femke Diercks with Janet C. Blyberg ed. Asia in Amsterdam: The Culture of Luxury in the Golden Age, Rijksmuseum, 17 October 2015 - 17 January 2016, pp. 94-97.

A pair of filigree candlesticks, 13cm. high, catalogued as 'India, Goa, or Batavia?, late 17th century,' which have an inventory reference from the 18th century when they were transferred from the state services cabinet of the Winter Palace in 1789, were exhibited in Silver Wonders from the East, Filigree of the Tsars, Hermitage Amsterdam, 27 April -17 September 2006.