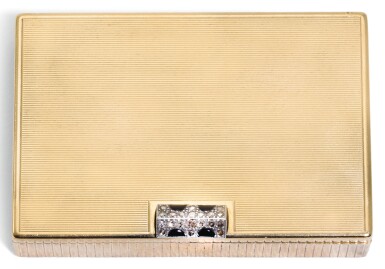 smart case; surface wear throughout, commensurate with age and regular use, a few small dents on the sides

The inscription, in facsimile of handwriting reading '18 Jan 1933-43,' records that this cigarette case was a 10th anniversary gift commemorating the marriage on 18 January 1933 at St. Margaret's, Westminster of Sir Hugh Houston Smiley, 3rd Bt. (1905-1990) and Nancy Elizabeth Louise Hardy (1909-1999), elder daughter of Ernest Walter Hardy Beaton and his wife, Esther (née Sisson). The wedding, at which Miss Beaton's younger sister, Baba (Barbara Jessica Hardy Beaton / Mrs. Alec Hambro, 1912-1973) was one of the bridesmaids, was designed and organised by the Beaton sisters' elder brother, Cecil, later Sir Cecil (1904-1980), the celebrated photographer and socialite. The Sketch (London, Wednesday, 25 January 1933, p. 139) noted that, 'The Wedding of Miss Nancy Beaton and Sir Hugh Smiley, Bt., was a ''snow-white Christmas-Fairy'' scene. The bride's dress of white chiffon, powdered with shimmering sequins and trimmed with ermine, had a train to match. The bridesmaids . . . wore white chiffon and were ''roped together'' with garlands of white flowers. The [three] pages . . . were in white satin knee-breeches, with sky-blue velvet coats.' The bride's bouquet was of lilies-of-the-valley and stephanotis tied with blue ribbons.

The thumbpiece of this case is decorated in Cartier's so-called ‘panther skin’ design. These abstract designs in diamonds and onyx became fashionable as early as the First World War; 'Panther skin' first appeared on a wristwatch in 1914, and a year later a watch pendant was decorated with the design (Hans Nadelhofer, Cartier, Jewelers Extraordinary, 1984, p. 229).