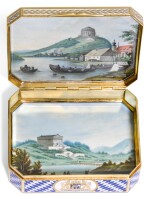 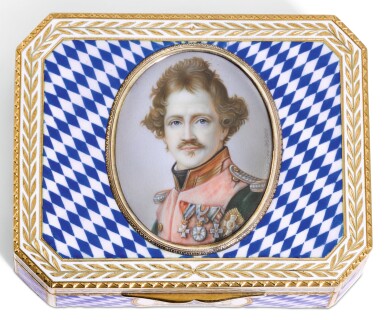 rectangular with cut corners, the lid applied with a miniature on ivory of Ludwig I of Bavaria, after Joseph Stieler, signed Jacques Hille, surrounded by blue and white enamel in the lozenge pattern of the Wittelsbach coat-of-arms, within gold and white laurel border, the interior painted with signed miniatures of Valhalla and the Befreiungshalle, the front with a gold and enamel cartouche representing the Bavarian Royal coat-of-arms above the dedication: Sr. M. König Ludwig III gewidmet, the sides with a white enamel cartouche with a gold royal crown below a leafy border, the reverse with a Regensburg town coat of arms above a ribbon inscribed 'Regensburg 1914', the base of reeded gold, apparently unmarked

This lot contains ivory. Due to recent changes in the laws of many countries (e.g. US, France) Sotheby's recommends that buyers check with their own government regarding any importation requirements prior to placing a bid. For example, US regulations restrict the import of elephant ivory and prohibit the import of African elephant ivory. Please note that Sotheby's will not assist buyers with CITES licence applications where a buyer elects to either collect or arrange their own shipping, nor will Sotheby's assist with the international movement of ivory by air, either as freight or through hand carry. Sotheby's shipping will only assist in shipping the lot to either domestic UK or EU destinations, where delivery is made by road transport. A buyer's inability to export or import these lots cannot justify a delay in payment or sale cancellation.

Whilst the sitter is Ludwig I, the inscription on this snuff box refers to Ludwig III (1845 –1921), the last King of Bavaria, reigning from 1913 to 1918. Wounded in the Austro-Prussian War in 1866, five years after he had begun a military career, Ludwig became disillusioned with the army and developed growing interest in agriculture, science and nature. In 1867 in Vienna, he met his future wife Maria Theresia, Archduchess of Austria-Este, whose wealth later enabled him to acquire an estate at Leutstetten in Bavaria, which was to become one of the biggest estates in Bavaria. Their happy marriage resulted in thirteen children. Having led Bavaria into the First World War, Ludwig lost the throne along with the other rulers of German states at the end of the war.

The box was probably made for the commemoration of the Hall of Liberation in August 1913, where the 100th anniversary of the 1813 German campaign of the Napoleonic Wars was celebrated. Members of the Sixth Coalition, including the German states of Austria and Prussia, plus Russia and Sweden, fought a series of battles in Germany against the French Emperor, which liberated the other German states from the domination of the First French Empire. By self-proclamation, Ludwig became King in November 1913, meaning the present box must have been made after that date, and presumably was one of the last presentation boxes ever made.

The miniatures on the inside of the present lot represent, among others, the Befreiungshalle, which King Ludwig I of Bavaria had ordered as a memorial for the victories against Napoleon. The famous neoclassicist architect Leo von Klenze (1784-1864), also court architect to Ludwig I, later altered the plans for the building, begun by Friedrich von Gärtner in 1842, and completed it in 1863. The opening ceremony took place shortly after, on 18 October 1863, the 50th anniversary of the Battle of Nations.