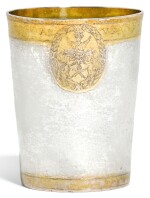 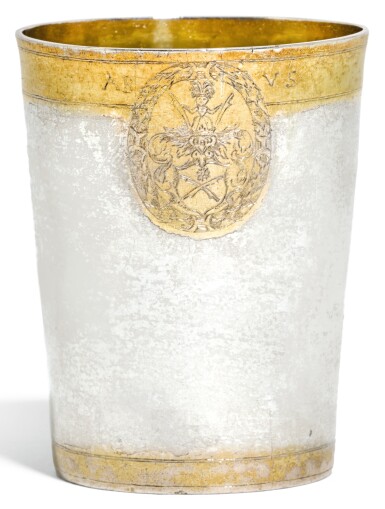 cylindrical, engraved with two coats of arms below initials FW VS and AB VS, and dated 1629, the base inset with a commemorative Saxony thaler, dated 1567

The arms on the beaker are those of SCHENCK de NYDECK of Courland.

The Thaler issued by Elector August of Saxony, commemorates the capture of Gotha, where the adventurer Wilhelm von Grumbach with his backer John Frederick a rival of August's for the Electorate, from another branch of the Wettin family, had taken refuge. The city capitulated, Grumbach was captured and executed by dismemberment. An English account at the time records, 'This Victorie was soe ioyfull to the elector Augustus, that in memorie thereof, hee caused dollars to be coyned with the inscripcion ''Tandem bona causa triumphat'.'' (Robert Beale, Daniel Rogers, Sir John Skene, 'Diplomatic intelligence of the Holy Roman Empire and Denmark during the reign of Elizabeth and James VI,' Camden Fifth Series vol. 49, London, 2016, p. 82).