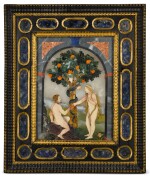 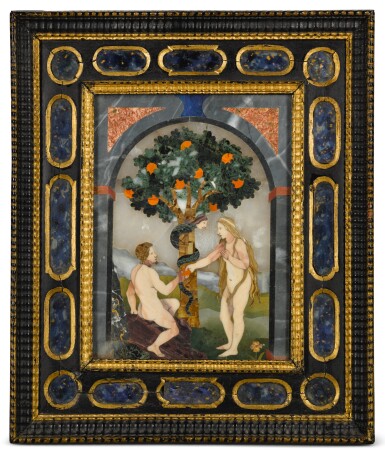 In overall good condition. The pietre dure surface with minor chips to the top right and left. The frame with minor construction cracks to border, one conserved break and very minor loss to bottom of the border. Minor losses to gilding. A very nice example of charming quality.

Although mythological and religious scenes were quite common themes translated into pietre dure compositions by the Opificio delle Pietre Dure in Florence, this panel depicting Adam and Eve finds no known comparable. The subject revealing the moment when Eve gives the apple to Adam was most probably based off a painting or print circulating in Italy at the time.

The present panel was no doubt intended to be the focal point on a cabinet or a wall. A series of panels in similar spirit and quality, depicting Orpheus charming animals, share the same style, shape and the successful trompe l’oeil flanked by columns and an arch (see E.Koch, Shah Jahan and Orpheus, 1988). There are in fact at least twenty-two documented panels depicting Orpheus, including: a panel on a cabinet at Chirk Castle, Wrexham (inv. no. NT 1170817.1), one on a cabinet sold Christie’s London, 6 July 2017, lot 6 and another panel is adorning a wall in the throne chamber at Divan-i 'Am, Red Fort, Delhi. Another panel in the same style but depicting a centaur is in the Florentiner Zimmer at Rastatt Favorite Palace, Germany (ill. C. Przyborowski,“Commesso-Tafeln Im Florentiner Kabinett in Schloss Favorite Bei Rastatt” in Mitteilungen Des Kunsthistorischen Institutes in Florenz, vol. 42, no. 2/3, 1998, pp. 383–457, fig. 25). Finally, another panel with a similar trompe l'oeil architecture is on a cabinet which panels were supplied by the Italian Domenico Benotti, now in the Victoria & Albert Museum, London (inv. no. W.24-1977).