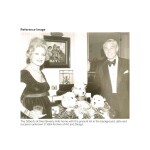 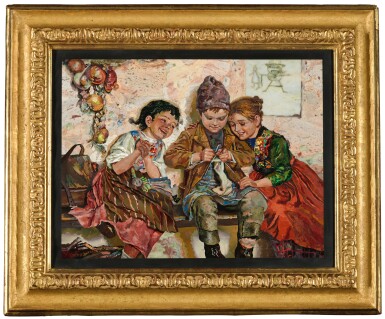 In overall excellent condition. The frame with minor chips, rubbing and losses to gilding. Break to top right of frame, which has been repaired.

This exceptional panel reflects the talent and extraordinary technical skills that the Florentine craftsman Mario Montelatici (1894-1974) showcased throughout his career.

Mario’s father, Giovanni Montelatici (d.1930), was renowned for his remarkable skill in rendering life-like religious, domestic and rural scenes in pietra dura. He established a workshop in Florence with fellow Italian artist Calileo Chini. The business flourished during the early decades of the 20th century, when Montelatici was joined by his two sons Alfonso (1880–1948) and Mario, who both supplied spectacularly realistic and painterly pictures. While Mario’s most popular image is undoubtedly the ‘Return from the market’ (V&A Loan, Gilbert: 75-2008), his pictures looking at the theme of childhood equally showcase his talent.

The current example is inspired by a painting by Edmund Adler (1876-1965) titled ‘His First Knitting Lesson’ (illustrated in Hooke and Poltimore, Popular 19th Century Painting: Dictionary of European Genre Painters, 1986, p.176). Just like Adler, Montelatici was admired for his naturalism and fresh approach to colour in his pictures.